As the nation's largest employer, the federal government strives to be a model for diversity, equity, inclusion, and accessibility (DEIA). This snapshot discusses our work in this area from 2017-2022. For example, we've found: 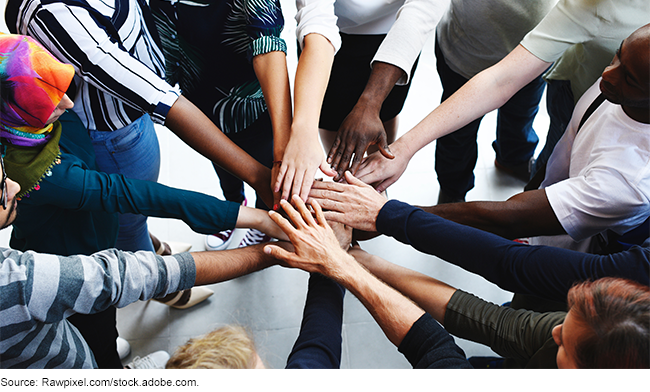 As the nation’s largest employer, the federal government strives to be a model for diversity, equity, inclusion, and accessibility (DEIA) and, according to Executive Order 14035, to cultivate a workforce that draws from the full diversity of the nation. In this Snapshot, we highlight selected findings and recommendations we have made between 2017 and 2022 to enhance DEIA in the federal workforce.

Our prior work identified nine practices for creating and maintaining a positive work environment, where the similarities and differences of individuals are valued and contribute to an organization’s goals and objectives. These practices are important for federal agencies to advance DEIA in their workforces. 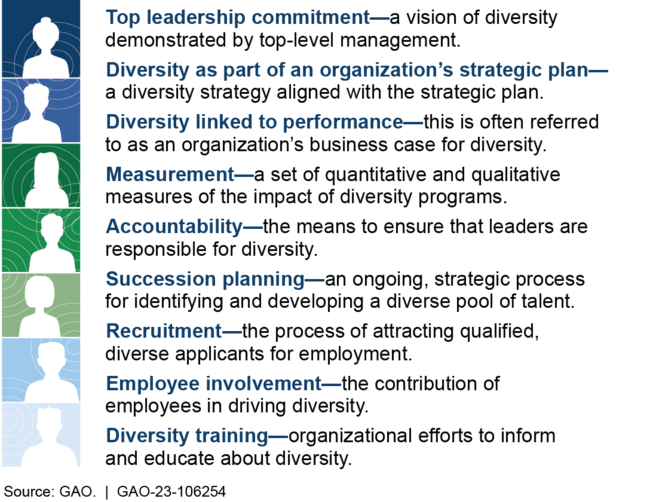 Federal agencies have had mixed success in increasing workforce diversity. For example, from fiscal years (FY) 2011-2019, the Intelligence Community's workforce had slight increases in the proportions of women, racial or ethnic minorities, and persons with disabilities, but the proportions were below federal workforce benchmarks for FY19. At the United States Agency for International Development, we found specific groups were underrepresented in promotions.

✓ We recommended that these agencies work to enhance accountability for DEIA workplace goals.

The U.S. Department of State told us it is planning to develop performance measures for DEIA-related goals, and was taking additional steps to identify diversity issues that could indicate potential barriers within its workforce.

✓ We recommended that the State Department establish performance measures for DEIA-related goals in the workplace and develop processes to evaluate progress.

Equity challenges continue to exist in veterans’ health care. According to Department of Veterans Affairs (VA) researchers, lesbian, gay, bisexual, and transgender (LGBT) veterans may experience higher rates of depression and more frequent thoughts of suicide. However, VA does not collect sexual orientation or self-identified gender identity data to analyze the health of the LGBT veteran population.

Also, VA medical centers are unable to readily identify and address disparities in health care outcomes by race and ethnicity due to data limitations.

Limitation with VA and Race and Ethnicity Data 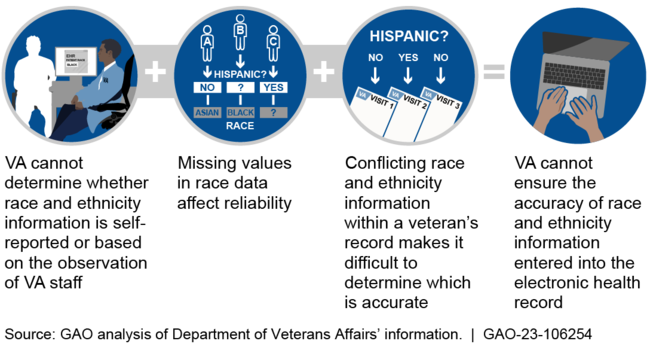 Additionally, we found that while the pay gap between men and women in the federal government is smaller than in the entire U.S. workforce, studies show that pay disparities still exist.

The Equal Employment Opportunity Commission (EEOC) analyzes agencies' pay gap data and data on promotions by gender, race, and ethnicity. However, we found these data to be incomplete.

✓ We recommended that EEOC assess the quality of the promotion data it collects and address data discrepancies, which EEOC has implemented.

From FY 2016-2018, Federal Air Marshal Service (FAMS) employees filed at least 230 discrimination complaints. FAMS had adopted an action plan to address discrimination allegations, but did not fully implement the plan.

✓ We recommended that FAMS reaffirm and strengthen efforts to prevent discrimination.

The Number of Persons with Disabilities Hire by the Federal Government, Fiscal Years 2011 through 2017 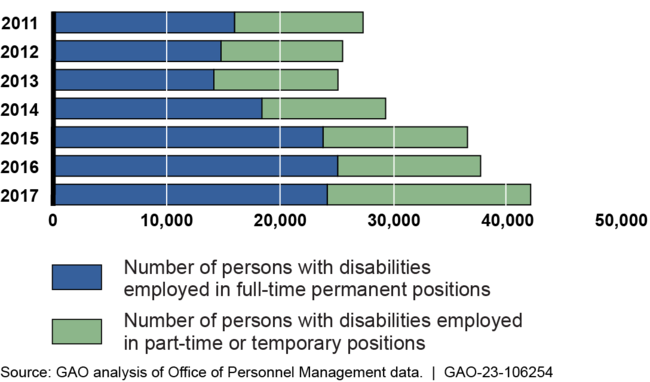 ✓ We recommended that the Office of Personnel Management (OPM) track and report additional retention data, which OPM has implemented.