We looked at federal agencies’ efforts to hire and retain individuals with disabilities.

We made 6 recommendations, including that the Office of Personnel Management track and report retention data of employees with disabilities to help determine why they leave.

The federal government generally increased hiring of persons with disabilities, fiscal years 2011 through 2017 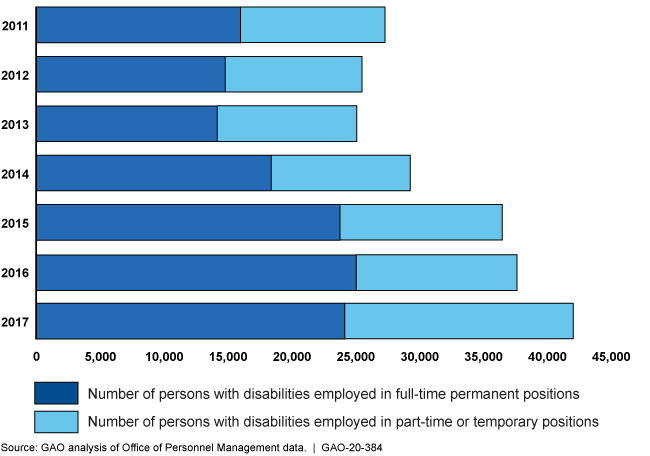 The Federal Government Generally Increased Hiring of Persons with Disabilities, Fiscal Years 2011 through 2017 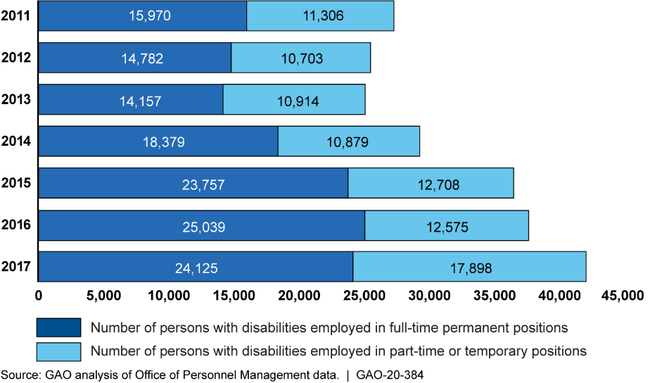 Although targeted data tracking and analyses could help pinpoint root causes contributing to departure rates, the Office of Personnel Management (OPM) does not track or report retention data on disabled employees. Doing so, and making such data available to agencies would facilitate more comprehensive analyses of the retention of employees with disabilities and identify needed improvements.

Officials at three agencies GAO examined—Department of Justice (DOJ), Small Business Administration (SBA), and Social Security Administration (SSA)—used various practices to increase hiring, such as training staff on Schedule A—a commonly used hiring authority to employ individuals with disabilities. However, the agencies neither assess the impact of training nor how it relates to contributing to performance goals of increasing the number of disabled hires.

Federal agencies are required to provide equal opportunity to qualified individuals with disabilities in all aspects of federal employment.

GAO analyzed data and documents from OPM and interviewed agency officials. GAO interviewed officials from DOJ, SBA, and SSA about their efforts to enhance employment opportunities for disabled persons. GAO selected these three agencies because they represent a range of agency size and relatively high or low percentages of total employees with disabilities.