In the 40 years since its creation, FEMA has undergone dramatic changes—most notably in 2003, when it became part of the newly created Department of Homeland Security in the aftermath of the events of 9/11.

In today’s WatchBlog, we explore what we have found as FEMA has evolved through the years, and what it can do to improve operations in the future.

A few years after FEMA’s creation, we reported on some problems FEMA faced in getting started. For example, in 1983 we noted that the agency didn’t have enough staff and had difficulties in defining its mission, goals, and objectives.

Hurricane Andrew slammed into South Florida in 1992. At the time, it was the most devastating and expensive disaster to hit the country. After that storm, we found that the federal government’s strategy for dealing with catastrophic disasters was inadequate. We noted that improving FEMA’s damage assessments, developing a disaster unit, and enacting legislation to aid in preparing for disasters would improve the nation's response to these events.

Since the start of this century, the country has been struck by many major disasters that have reshaped how the government prepares for, responds to, and recovers from, disasters. In 2005, Hurricane Katrina hit the Gulf Coast and is still considered one of the worst natural disasters to strike the country.

We made numerous recommendations after Katrina to help the government confront future catastrophic events—many of which were implemented. Among our recommendations were that DHS provide guidance and direction to other federal, state, and local agencies to ensure adequate preparedness, response, and recovery roles.

In 2012, Hurricane Sandy hit the Mid-Atlantic and northeastern states and caused $65 billion in damage.

We reported afterwards that the federal government should develop a strategy to help the nation reduce future disaster risk. Our podcast from that time has more details.

After both disasters, Congress passed major legislation to reform FEMA.

Recent large-scale disasters—such as hurricanes Harvey, Irma, Maria, and the California wildfires—have created unprecedented demand for federal disaster help. In fact, the 2017 hurricane and wildfire season included 3 of the top 5 costliest hurricanes on record at the time. As of June 2018, Congress had appropriated over $120 billion in supplemental funding for response and recovery related to these disasters.

FEMA’s workforce also swelled during this time. We reported that, in October 2017, close to 14,000 federal employees were deployed in response to the disasters. 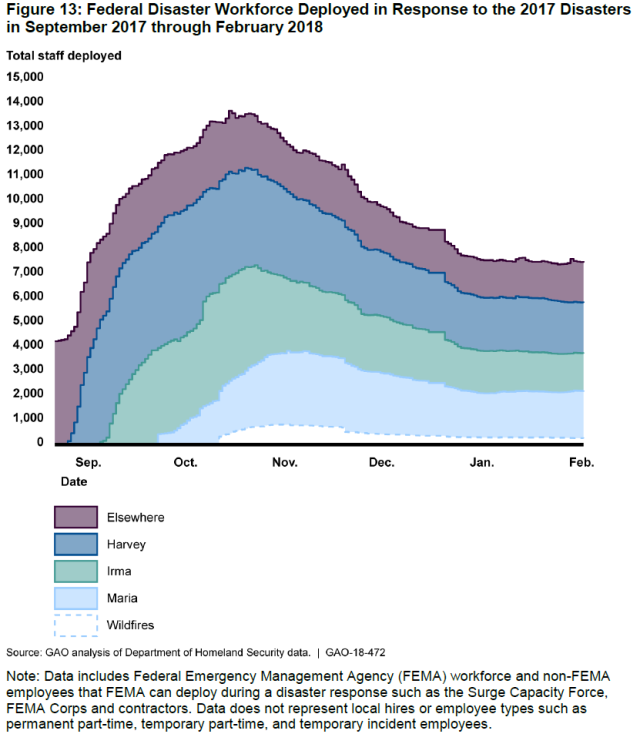 Listen to our podcast with Chris Currie, a director in our Homeland Security and Justice team, for more on what we found:

And watch our video, where Chris answers questions from the public and talks about federal disaster assistance efforts and challenges.

In 2018, more catastrophic hurricanes and wildfire disasters hit the country, requiring even greater federal disaster assistance. We have work underway now examining how FEMA responded to these disasters.

What’s needed in the future?

One of our open priority recommendations is for FEMA to develop a better way to assess whether states and local governments can respond to and recover from disasters without federal assistance. FEMA is working on this problem but does not yet have an estimated date for completing its efforts.

We also have other open recommendations to FEMA, including reviewing the number of staff it requires, defining its mission needs, and filling its skill gaps.

Further, FEMA has a role to play in one of our high-risk areas: limiting the federal government's fiscal exposure by better managing climate change risks. For example, we noted in our 2019 High Risk List report that FEMA has not completed a national preparedness assessment to help set priorities for grant funding.

As the 2019 hurricane and wildfire season approaches, FEMA will need to be ready. We will continue to review the agency’s efforts just as we have done for many decades.