In 2017, 4 disasters—hurricanes Harvey, Irma, Maria, and the California wildfires—created unprecedented demand for federal disaster help. The federal government has provided at least $120 billion in supplemental funding for these disasters, as well as help with response and recovery.

For example, FEMA provided significant support to Puerto Rico and the U.S. Virgin Islands in response to Hurricanes Irma and Maria. However, we found that numerous challenges—such as complex logistics for supplies due to distances from the mainland, and the need to provide a number of services due to widespread devastation and loss of power—slowed FEMA's work. 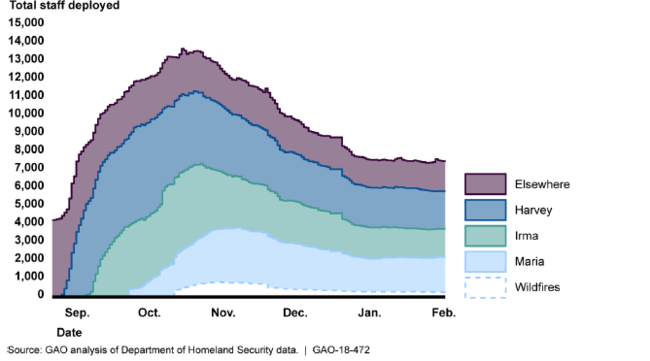 Federal and state preparedness and coordination efforts prior to and after the 2017 hurricane and wildfire disasters facilitated the response in Texas, Florida, and California. Specifically, the Federal Emergency Management Agency (FEMA) and state emergency management officials implemented various preparedness actions prior to landfall of the hurricanes and during the wildfires—such as predeploying federal personnel to support response efforts; colocating federal, state, and local emergency managers; and pre-staging and delivery of commodities like food and water. Further, according to FEMA and state officials, preexisting coordination mechanisms and relationships also facilitated response efforts in each state. For example, FEMA and each state had conducted numerous emergency exercises in the years prior to these disasters and had developed relationships during response to prior disasters that led to accelerated decision-making during the 2017 disasters. Federal and state officials emphasized that there were certainly unprecedented challenges during these disasters—such as deploying a sufficient and adequately-trained FEMA disaster workforce—and lessons learned, but prior response coordination efforts helped to quickly and effectively resolve many of these challenges.

The federal government provided significant support to Puerto Rico and the U.S. Virgin Islands in response to Hurricanes Irma and Maria, but faced numerous challenges that complicated response efforts. FEMA efforts in Puerto Rico alone were the largest and longest single response in the agency's history. As of April 2018, FEMA had obligated over $12 billion for response and recovery for Hurricane Maria (see figure below) reflecting the scale and complexity of efforts given the widespread damage. FEMA tasked federal agencies with over 1,000 response mission assignments for Hurricanes Maria and Irma in the territories at a cost of over $5 billion, compared to about 400 such assignments for Hurricanes Harvey and Irma and the California wildfires combined. For example, FEMA assigned the U.S. Army Corps of Engineers the mission to install over 1,700 emergency electricity generators in Puerto Rico, compared to the 310 for the response to Hurricane Katrina.

Note: An obligation is a definite commitment that creates a legal liability of the government for the payment of goods and services ordered or received. An expenditure is an amount paid by federal agencies by cash or cash equivalent, during the fiscal year to liquidate government obligations.

Nevertheless, GAO found that FEMA faced a number of challenges that slowed and complicated its response efforts to Hurricane Maria, particularly in Puerto Rico. Many of these challenges were also highlighted in FEMA's own 2017 hurricane after action report, including:

The 2017 hurricanes and wildfires highlighted some longstanding issues and revealed other emerging response and recovery challenges. For example, the concurrent timing and scale of the disaster damages nationwide caused shortages in available debris removal contractors and delays in removing disaster debris—a key first step in recovery. In addition, FEMA's available workforce was overwhelmed by the response needs. For example, at the height of FEMA workforce deployments in October 2017, 54 percent of staff were serving in a capacity in which they did not hold the title of “Qualified”—according to FEMA's qualification system standards—a past challenge GAO has identified. FEMA officials noted that staff shortages, and lack of trained personnel with program expertise led to complications in its response efforts, particularly after Hurricane Maria.

Federal Disaster Workforce Deployed at the Height of 2017 Response Acivities 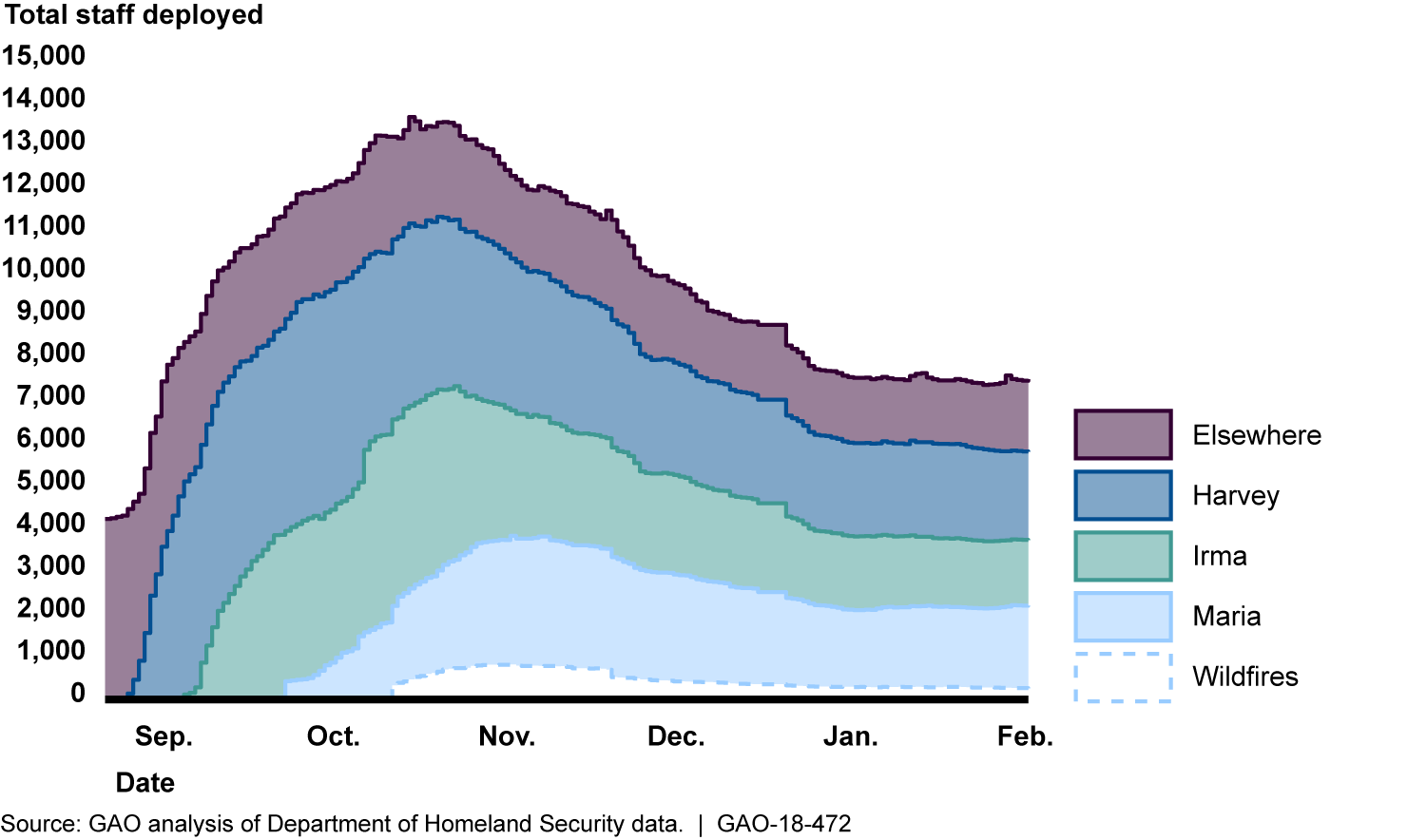 Further, federal, state, and local officials faced challenges finding temporary housing for disaster survivors given the extensive damage to available housing in each location. For example, given the widespread damage in Puerto Rico and lack of hotels and other temporary housing, FEMA transported survivors to the mainland United States to stay in hotels. FEMA also used new authorities and procedures to meet the need, such as providing Texas as much as $1 billion to manage its own housing program. However, this approach had not been used or tested in past disasters and state officials noted challenges in managing the program such as staffing shortfalls. State officials further noted challenges in coordinating with FEMA that led to delays in providing assistance to survivors. GAO will continue to monitor these programs.

In 2017, four sequential disasters—hurricanes Harvey, Irma, Maria, and the California wildfires—created an unprecedented demand for federal disaster response and recovery resources. According to FEMA, 2017 included three of the top five costliest hurricanes on record.

The National Oceanic and Atmospheric Administration estimated that the cumulative damages from weather and climate related disasters in the United States were over $300 billion in 2017 alone. As of June 2018, Congress had appropriated over $120 billion in supplemental funding for response and recovery related to the 2017 hurricanes and wildfires. Further, in October 2017, close to 14,000 federal employees were deployed in response to the disasters.

Given the scale and cost of these disasters, Congress and others have raised questions about the federal response and various recovery challenges that have arisen since the disasters. This report provides GAO's observations on: (1) federal and state preparedness and response coordination for hurricanes Harvey and Irma in Texas and Florida, and the California wildfires; (2) federal preparedness for and response to hurricanes Irma and Maria in Puerto Rico and the U.S. Virgin Islands; and (3) existing and emerging disaster recovery challenges highlighted by these disasters.

Additionally, GAO interviewed state and territorial emergency management officials or their designee in Texas, Florida, California, Puerto Rico, and the U.S. Virgin Islands, as well as officials from eight cities and counties in Texas, Florida, and California (selected based on their proximity to the disaster impacted areas and their availability) to discuss their observations on the federal response in their respective jurisdictions. While the perspectives of these officials are not generalizable, they provided valuable insights into the federal response to the 2017 disasters.

This report includes 10 appendices that provide further details and data on federal response and recovery efforts. These areas cover key issues and challenges that GAO believes are critical for assessing the federal response and warrant continued Congressional and agency oversight during disaster recovery.

GAO is not making recommendations in this report, but has ongoing work that will address various response and recovery programs and challenges in more detail. GAO will make recommendations, as appropriate, once this work is completed.

In commenting on a draft of this report, DHS stated that the report highlighted the challenges of the complicated response and recovery efforts as well as provided insights into these efforts. DHS also noted that it is continuing to apply lessons learned from 2017 to improve its future program delivery and response efforts.