Human trafficking victims are often held in slave-like conditions and forced to work in the sex trade or other servitude. One international organization estimated about 25 million people were trafficked in 2016.

The U.S. seeks to combat trafficking. For example, the Departments of State, Labor, Homeland Security, and Defense, and the U.S. Agency for International Development have programs to prevent trafficking, prosecute traffickers, and protect survivors.

We've highlighted our prior work on U.S. anti-trafficking activities. For instance, we found that staffing gaps, unclear roles, and weaknesses in monitoring have impeded some efforts. 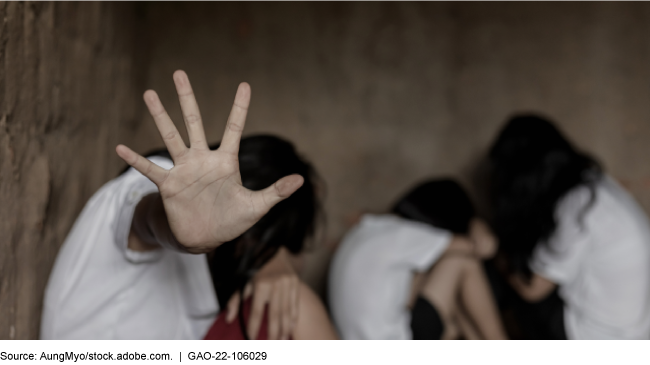 Federal agencies implement a range of efforts to combat international human trafficking. GAO found gaps that could impede these efforts, such as unclear roles and weaknesses in monitoring.

Human trafficking—also known as trafficking in persons —is a longstanding global problem. Though data are limited by trafficking's clandestine nature, the International Labour Organization estimates that about 25 million people were victims of human trafficking worldwide in 2016.

Human trafficking victims are often held in slavelike conditions and forced to work in the commercial sex trade and other types of servitude. The U.S. government has also found forced labor overseas in a number of industries producing goods that are or may be imported into the U.S. 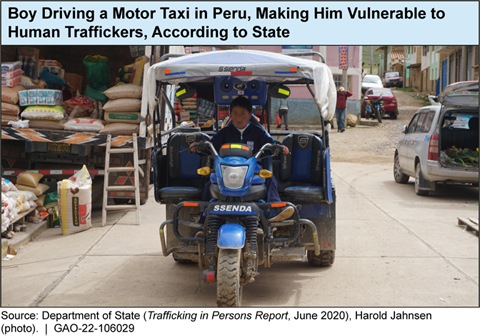 Global ranking and reporting. State and Labor publish reports with information about human trafficking and forced labor worldwide. For example, State's annual Trafficking in Persons Report ranks countries on the extent of their governments' anti-trafficking efforts.

Contracting and procurement oversight. State, the Department of Defense (DOD), and USAID oversee contractors for services overseas to ensure they follow anti-trafficking requirements to help protect foreign workers from traffickers. DOD also has policies and processes for its commissaries and exchanges worldwide—which provide retail goods to service members—to prevent the resale of goods produced with forced labor.

We found CBP had increased resources for its Forced Labor Division, which it formed in 2018 to lead efforts to prevent forced labor imports. However, CBP had not assessed the division's workforce needs, such as staff numbers, types, locations, or specialized skills. As a result, the division faced challenges in enforcing the prohibition on forced labor. For instance, it had to suspend some ongoing investigations because of a staff shortage. We recommended CBP assess the division's workforce needs. (GAO-21-106) 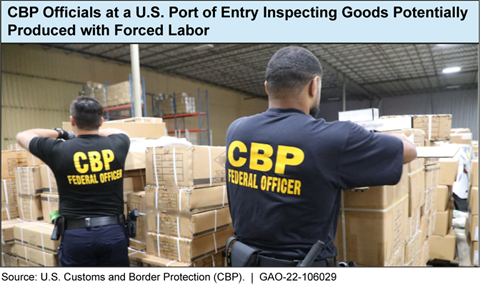 Further, DOD, State, and USAID acquisition officials responsible for contracting and procurement oversight were not always aware of, or fulfilling, their anti-trafficking responsibilities because of unclear guidance. For example:

In response to our recommendations, agencies have taken steps to improve oversight of contracts, such as helping to update a regulation that could help prevent trafficking abuses related to recruitment fees. But DOD still needs to clarify responsibility for reporting trafficking violations and investigations of contractors.

We found problems with data reliability and sharing of TIP information, which could hamper agencies’ efforts to ensure compliance with U.S. laws and regulations and with agencies’ policies and guidance. For example: 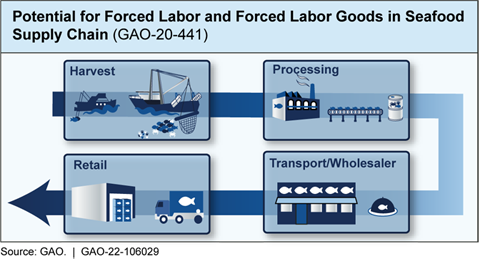 DOD officials had not used information available from other agencies about risks that goods sold in commissaries and exchanges were produced with forced labor. (GAO-22-105056)

In response to our recommendations, CBP and DOD have taken steps to improve data reliability and information sharing. But DOD hasn’t yet required its officials to use information from other agencies about at-risk goods.

We found weaknesses in agencies’ monitoring of their international anti-trafficking efforts. For example: