Human traffickers around the world exploit men, women, and children for profit—often through commercial sex work or forced labor. The State Department annually reports on global antitrafficking efforts—ranking countries into 1 of 4 tiers based on their actions.

We found several key shortcomings in State's 2015 and 2016 reports—potentially limiting their usefulness as tools to encourage governments to fight trafficking. For example, the reports lacked clear explanations for some countries' rankings, or for decisions to upgrade or downgrade a country to a different tier.

We recommended that State improve the transparency and clarity of the Trafficking in Persons Report. (An earlier version of this summary was not clear about the nature of GAO’s recommendations. It has been updated.) 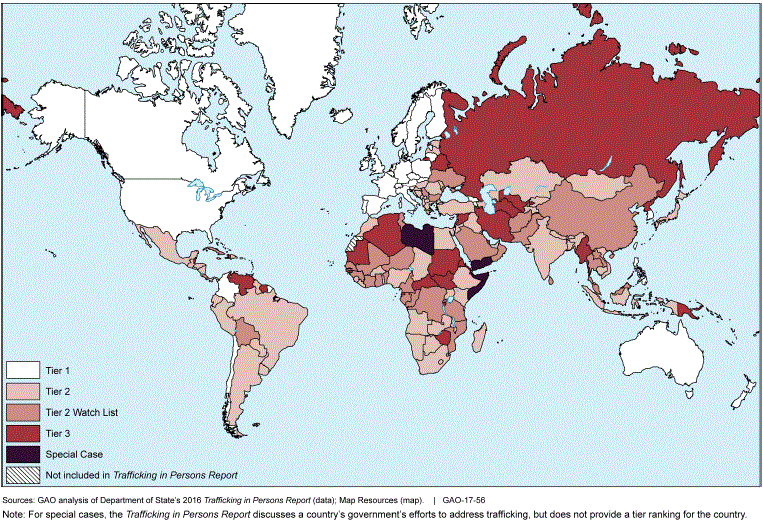 The Department of State's (State) Office to Monitor and Combat Trafficking in Persons (Trafficking Office) compiles information on countries' actions to combat human trafficking and recommends tier rankings for the Trafficking in Persons Report but did not post information on waivers within mandated timeframes. The figure below shows the percentage of countries by tier in the 2015 and 2016 reports. Disagreements about tier rankings between the Trafficking Office and other parts of State, which have different priorities, are usually resolved at the working level, according to officials, with only a few elevated to the Secretary of State for resolution. The Secretary of State determines all final tier rankings. The Trafficking Office recommends whether to grant waivers for countries that otherwise would be automatically downgraded to the lowest tier. The Trafficking Victims Protection Act (TVPA) requires State to post a detailed description of the credible evidence used to support these waivers on its website annually, but State did not do so for the 2014 through 2016 reports until September 2016.

Figure: Percentage of Countries by Tier in 2015 and 2016 Trafficking in Persons Reports

State has made improvements to the Trafficking in Persons Report since 2006 but does not explicitly explain the basis for certain countries' tier rankings or, where relevant, why countries' tier rankings changed. GAO's analysis of the 2015 Trafficking in Persons Report found that, compared with GAO's previous report in 2006, there were fewer instances in which minimum standards and criteria were not mentioned in the narratives. However, most narratives for the highest-ranked, or Tier 1, countries in the 2015 and 2016 reports did not explicitly explain the basis for the tier rankings. The narratives sometimes included language that seemed contradictory to certain standards and criteria. In addition, GAO found that, for countries that changed tier from one year to the next, most narratives did not provide an explicit explanation as to why the rankings changed. Standards for Internal Control in the Federal Government states that information should be communicated in a way that is useful to internal and external users. Lacking such clarity could diminish the report's usefulness as a tool to advance efforts to combat trafficking.

State and other officials indicate that the Trafficking in Persons Report can be a useful tool to engage other countries about trafficking, but State has not systematically assessed the report's effectiveness. As a result, the effect of the report in encouraging governments to make progress in combating trafficking is not well understood. However, State officials stated that they are working on efforts to assess the report's effectiveness at achieving the goal of addressing trafficking worldwide.

Human traffickers exploit men, women, and children for financial gain. Congress enacted the TVPA in 2000, which requires the Secretary of State to report annually on governments' efforts according to the act's minimum standards for the elimination of trafficking. Each year since 2001, State has published the Trafficking in Persons Report , ranking countries into one of four tiers. GAO found in 2006 that the report did not fully describe State's assessment of compliance with standards or provide complete explanations for ranking decisions.

The explanatory statement accompanying the Consolidated Appropriations Act, 2014, included a provision for GAO to review the report's preparation and effectiveness. This report addresses (1) the process to develop the report, (2) the extent to which country narratives discuss minimum standards, and (3) the extent to which State assesses the report's effectiveness as a tool to address trafficking. GAO compared 220 country narratives in the 2015 and 2016 reports with the minimum standards and analyzed 82 narratives for countries that changed tier. GAO also interviewed State and other officials.

GAO is making four recommendations to the Secretary of State to improve the clarity and usefulness of the Trafficking in Persons Report by posting evidence to support downgrade waivers on State's website, improving explanations for tier rankings and changes, and assessing the effectiveness of the report as a tool to address trafficking. State agreed with GAO's recommendations.