Human trafficking victims are often held in slave-like conditions and forced to work in areas such as the commercial sex trade, factories, and agriculture.

The Departments of State and Labor, and the U.S. Agency for International Development managed 120 counter-trafficking projects in FY 2017. These projects were carried out by grantees and others, and overseen by the agencies.

We found some weaknesses in State’s and USAID’s monitoring of projects we reviewed, including the use of inconsistent and incomplete information to assess project performance.

We made 5 recommendations to improve monitoring.

A woman picks cotton in Uzbekistan. 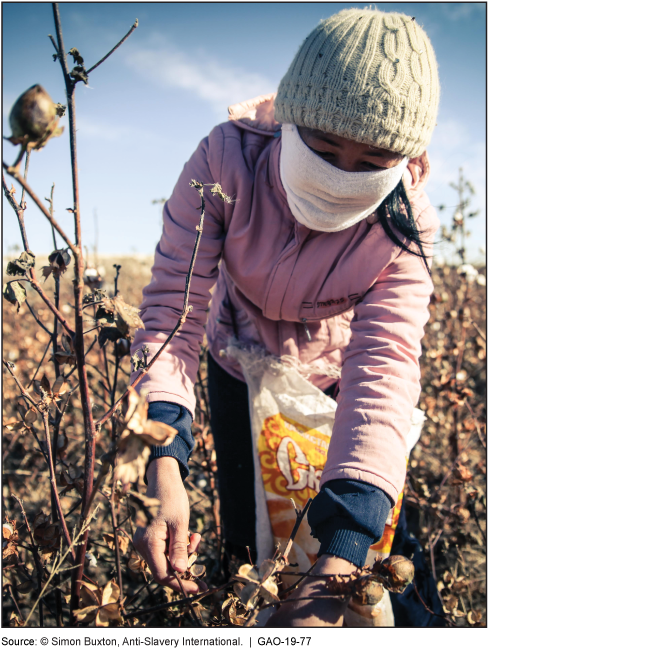 This is a photo of a woman picking cotton.

GAO reviewed a selection of 54 counter-trafficking projects (37 State, 3 DOL, and 14 USAID), and found that DOL and USAID had fully documented their monitoring activities, while State had not. All three agencies used similar tools to monitor the performance of their projects, such as monitoring plans, performance indicators and targets, progress reports, and site visits. GAO found, however, that State did not fully document its monitoring activities for 16 of its 37 projects (43 percent). GAO found that State did not have the monitoring plans or complete progress reports for one-third of its projects and often lacked targets for performance indicators in its final progress reports. State officials said they had not required targets for each performance indicator for the projects GAO reviewed, or had not set targets due to limited resources in prior years. State has taken steps to improve its monitoring efforts, including issuing a November 2017 policy that requires targets to be set for each performance indicator and developing an automated data system that would require targets to be recorded. However, because the pilot data system allows targets to be recorded as “to be determined” and does not have controls to ensure entry of actual targets, it is uncertain whether performance targets will be regularly recorded. Without full documentation of monitoring activities and established performance targets, State has limited ability to assess project performance, including project efficiency or effectiveness.

Human trafficking is a pervasive problem throughout the world. Victims are often held against their will in slave-like conditions.

The National Defense Authorization Act for Fiscal Year 2017 includes a provision for GAO to report on the programs conducted by specific agencies, including State, DOL, and USAID, that address trafficking in persons. Among other objectives, this report (1) identifies the recent projects in international counter-trafficking in persons that key U.S. agencies have awarded to implementing partners; and, for selected projects, assesses the extent to which key agencies have (2) documented their monitoring activities and (3) ensured the reliability of project performance information.

GAO reviewed State, DOL, and USAID project documents and interviewed agency officials. GAO reviewed monitoring documents for 54 of the 57 projects that were active from the beginning of fiscal year 2016 through the end of fiscal year 2017. Of these 54 projects, GAO selected a nongeneralizable sample of 5 projects, based primarily on largest total award amounts, for review of the reliability of project performance information.

What is the U.S. Government Doing to Combat Human Trafficking?