U.S. Customs and Border Protection can issue orders to detain shipments if it has reasonable evidence that the merchandise was made with forced labor.

How does CBP review appeals of those orders?

CBP has not published its process for how it revokes these orders to detain shipments, which could help the private sector comply with the law. We recommended it do so. 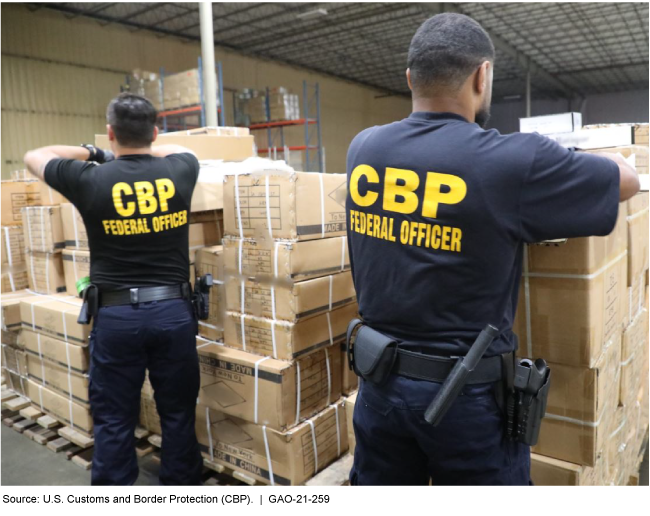 CBP has taken steps to communicate with other federal agencies as well as nonfederal stakeholders about its enforcement of Section 307.

CBP communicates with other agencies, including the Departments of Labor and State, through monthly meetings of an interagency working group. During these meetings, members discuss their agencies' forced labor–related efforts and CBP reports its planned enforcement actions.

CBP officials told GAO that they may communicate separately with other agencies' officials to obtain or share information relevant to CBP's investigations.

However, one aspect of CBP's communication with other federal agencies and nonfederal stakeholders lacks transparency. CBP has published a description of its process for issuing WROs as well as the types of information it requires to revoke or modify them. But CBP has not published a description of its WRO revocation and modification process, comparable to a description of its WRO issuance process posted on its website. As a result, other agencies and stakeholders lack knowledge of the process. This may limit the agencies' ability to support CBP's enforcement and the private sector's ability to comply with Section 307.

Globally, millions of adults and children are subjected to forced labor, compelled to perform work or service under various forms of threat or coercion. Section 307 of the Tariff Act of 1930 prohibits the importation into the United States of goods produced in any foreign country wholly or in part by forced labor. CBP has sole responsibility for enforcing this law.

The Frederick Douglass Trafficking Victims Prevention and Protection Reauthorization Act of 2018 included a provision that GAO review CBP's efforts to enforce Section 307 and other entities' roles in indirectly supporting CBP's enforcement. This report examines, among other things, CBP's approach to enforcing Section 307 and the extent to which CBP has communicated with other federal agencies and nonfederal stakeholders with respect to Section 307 enforcement.

GAO reviewed laws and CBP documents and interviewed officials from CBP, other federal agencies, and 24 NGOs and private sector entities with knowledge of Section 307. GAO met with officials from the United States, Brazil, China, Malawi, and Malaysia.