Because there’s a risk of reprisal, such as being fired or reassigned, it’s important to safeguard whistleblowers’ identities and the information they provide.

For National Whistleblower Day, today’s WatchBlog explores some of our work on how federal agencies and Congress deal with whistleblowers—and what can be improved.

In space, can anyone hear you whistle?

Contractors who work for NASA are legally protected from reprisal for whistleblowing. This is important given their large role in helping NASA fulfill its mission—and the sometimes enormous safety risks involved in space exploration.

After NASA’s Inspector General investigates potential reprisal, the NASA Administrator is responsible for determining within 30 days whether it actually happened. Whistleblowers count on a speedy resolution to their complaints.

However, we found that NASA hadn’t been meeting the 30-day time frame since 2008. We recommended that NASA take steps to fix it.

Employee misconduct at VA's medical facilities can have serious consequences for veterans, including poor quality of care—which is why it’s important that employees feel safe coming forward with concerns. However, that may not always be the case.

We found that VA whistleblowers were significantly more likely than their peers to receive disciplinary action and had higher attrition rates than their peers who hadn’t reported misconduct—both of which may indicate that senior officials have retaliated against their whistleblower employees.

In addition, VA can’t ensure that all referred allegations of misconduct are investigated by a neutral third party. As a result, we found instances where managers investigated themselves for misconduct, presenting a clear conflict of interest.

We made 16 recommendations to the VA to address these issues.

What happens at the IG should stay at the IG

At DOD, whistleblowers can report to one of several Inspector General offices. We found that the IG offices have taken steps to protect confidentiality and safeguard whistleblower information in their IT systems and applications, such as by restricting access to case information through unique user permissions.

However, we found instances in which DOD IG offices hadn’t fully restricted access to sensitive whistleblower information to only those IG employees with a need to know. While some actions have been taken to address this issue, additional steps should be taken to ensure whistleblower confidentiality isn’t in jeopardy.

We made 12 recommendations to DOD to help protect whistleblowers and improve other aspects of IG investigations.

What’s in it for tax whistleblowers?

Whistleblowers who report people who don’t fully pay their taxes have helped IRS collect billions of dollars in unpaid taxes. In exchange, IRS pays qualifying whistleblowers 15-30% of the proceeds it collects as a result of their information. 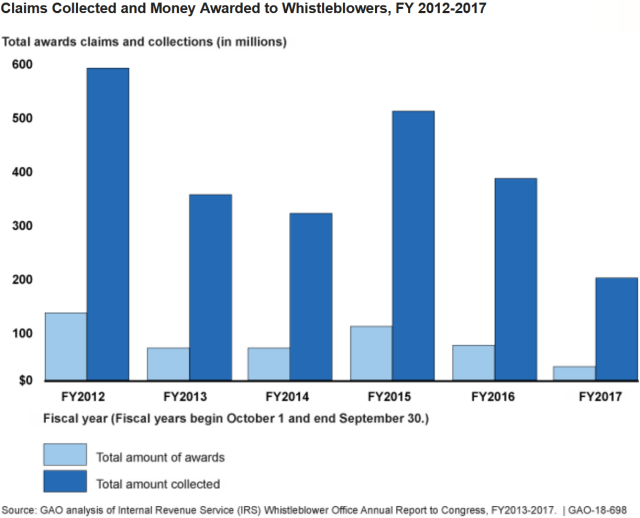 However, until last year, IRS wasn’t required to reward whistleblowers for information that led to the collection of penalties against people who don’t report their offshore bank accounts and other violations.

After Congress began to require IRS to reward whistleblowers for this information in February 2018, both the IRS and whistleblowers saw an immediate and large uptick in payments. From February 9 to September 30 that year, IRS paid awards for $810 million in collections that previously would have been excluded—significantly more than had been collected in prior years for all tax code violations. The whistleblowers got their cut.

According to attorneys we spoke with for our report, whistleblowers are now more likely to come to IRS with valuable information.

Blowing the whistle to Capitol Hill

People can reach out to congressional committees or to their own representatives or senators when they need to blow the whistle on government operations. 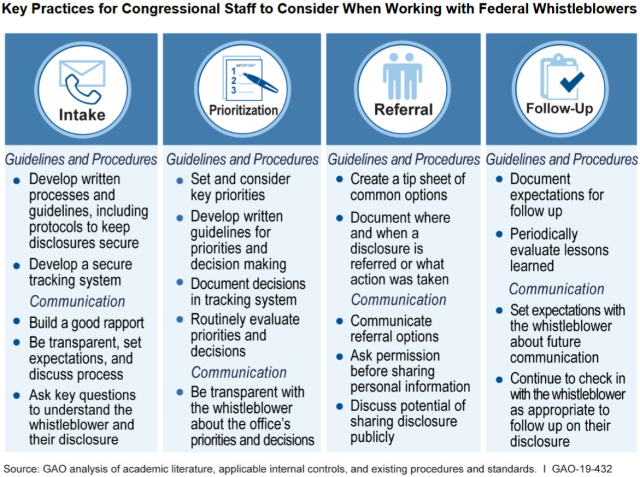 Another option for blowing the whistle on fraud, waste, abuse, or mismanagement of federal funds is right here at GAO. You can anonymously report to GAO’s FraudNet.