Tax whistleblowers who report on the underpayment of taxes by others have helped IRS collect $3.6 billion since 2007. Whistleblowers can claim awards of between 15 and 30 percent of the proceeds that IRS collects as a result of their information. 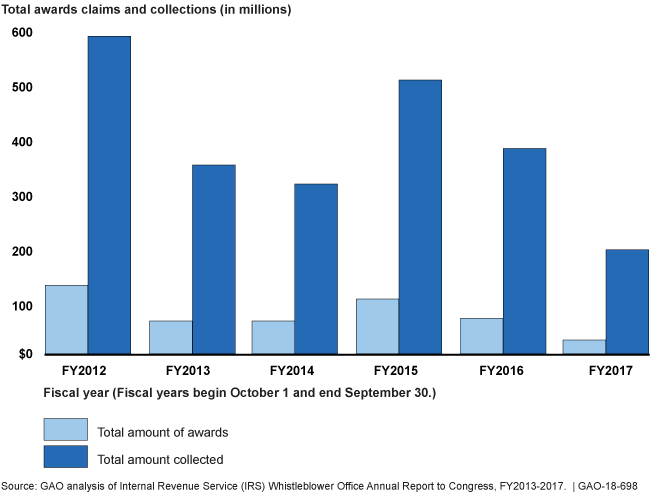 Prior to February 9, 2018, when Congress enacted a statutory change requiring the Internal Revenue Service (IRS) to include penalties for Report of Foreign Bank and Financial Accounts (FBAR) violations in calculating whistleblower awards, IRS interpreted the whistleblower law to exclude these penalties from awards. However, GAO found that some whistleblowers provided information about FBAR noncompliance to IRS. In a sample of 132 whistleblower claims closed between January 2012 and July 2017, GAO found that IRS assessed FBAR penalties in 28 cases. It is unknown whether the whistleblower's information led IRS to take action in all of these cases. These penalties totaled approximately $10.7 million. Had they been included in whistleblower awards, total awards could have increased up to $3.2 million. Over 97 percent of the FBAR penalties collected from these 28 claims came from 10 cases with willful FBAR noncompliance, for which higher penalties apply.

a Maximum potential award is defined as 30 percent of the FBAR penalty amount.

IRS forwards whistleblower allegations of FBAR noncompliance to its operating divisions for further examination. However, IRS Form 11369, a key form used for making award determinations, does not require examiners to include information about the usefulness of a whistleblower's information FBAR and other non-tax issues. After Congress enacted the statutory change, IRS suspended award determinations for 1 week, but resumed the program before updating the form or its instructions, or issuing internal guidance on new information required on the Form. As of June 28, 2018, IRS had not begun updating the Form 11369 or its instructions. The lack of clear instructions on the form for examiners to include information on FBAR and other non-tax enforcement collections may result in relevant information being excluded from whistleblower award decisions.

IRS maintains FBAR penalty data in a standalone database. It uses these data for internal and external reporting and to make management decisions. Because of the change in statute, IRS will need these data for determining whistleblower awards. GAO found that IRS does not have sufficient quality controls to ensure the reliability of FBAR penalty data. For example, IRS staff enter data into the database manually but there are no secondary checks to make sure the data entered are accurate. Without additional controls for data reliability, IRS risks making decisions, including award determinations, with incomplete or inaccurate data.

This is a public version of a sensitive report issued in August 2018. Information on the FBAR Database that IRS deemed to be sensitive has been omitted.

Tax whistleblowers who report on the underpayment of taxes by others have helped IRS collect $3.6 billion since 2007, according to IRS. IRS pays qualifying whistleblowers between 15 and 30 percent of the proceeds it collects as a result of their information. However, until February 9, 2018, IRS did not pay whistleblowers for information that led to the collection of FBAR penalties.

GAO was asked to review how often and to what extent whistleblower claims involve cases where FBAR penalties were also assessed. Among other objectives, this report (1) describes the extent to which FBAR penalties were included in whistleblower awards prior to the statutory change in definition of proceeds; (2) examines how IRS used whistleblower information on FBAR noncompliance, and how IRS responded to the statutory change in definition of proceeds; and (3) describes the purposes for which IRS collects and uses FBAR penalty data, and assesses controls for ensuring data reliability. GAO reviewed the files of 132 claims closed between January 1, 2012, and July 24, 2017, that likely included FBAR allegations; analyzed IRS data; reviewed relevant laws and regulations, and IRS policies, procedures and publications; and interviewed IRS officials.

GAO recommends IRS update IRS Form 11369 and improve controls for the reliability of FBAR penalty data. IRS agreed with all of GAO's recommendations.