Last month marked a milestone in the history of the country’s federal personnel system. Forty years ago on October 13, the Civil Service Reform Act (CSRA) was landmark legislation and it continues to serve as the foundation for much of the present personnel system governing federal workers. Today’s WatchBlog explores what we have found about its implementation through the years and opportunities that lie ahead.

What is the Civil Service Reform Act?

The CSRA significantly changed how the federal government manages its workforce.  For example, it replaced the Civil Service Commission with the Office of Personnel Management (OPM). It also enacted nine merit system principles designed to improve the quality of public service by, among other actions, recruiting employees from all segments of society, providing equal pay for work of equal value, and retaining and separating employees on the basis of their performance. Further, the CSRA also established a Senior Executive Service so government would have competent executives.

Shortly after it was enacted, we reported on OPM’s progress implementing the CSRA and noted that despite reforms, the civil service system was still viewed as burdensome, outdated, overregulated, and inflexible. Over the years, we have recommended numerous actions OPM should take to strengthen federal personnel management.

What Are More Recent Issues?

Fast forward to today: we believe that key personnel functions still need to be modernized. Since CSRA was enacted, the federal workforce has changed to include many more white collar jobs requiring complex analytical thinking skills. In light of these changes, in 2008 we reported on additional efforts needed in human capital planning, diversity management, and OPM leadership.

What’s Needed in the Future?

Since 2014, we have made a number of priority recommendations to OPM that address broader government-wide reforms. For example, we recommended that the government use prior studies and lessons learned to examine ways to make the GS system’s design and implementation more consistent with the attributes of a modern, effective classification system.

Meanwhile, federal agencies can take some actions on their own to improve how they manage their workforce. Implementing our leading practices in human capital management is a good place to start. We have also made recommendations to address and close skills gaps within specific federal agencies as well across the federal government.

Recently, we highlighted how agencies already have the authority to make changes but often are not taking advantage of that authority. In 2016, we found that many federal agencies were using relatively few available hiring authorities. A hiring authority is the law, executive order, or regulation that allows an agency to hire a person into the federal civil service. Agencies used 105 hiring authorities in fiscal year 2014, but relied on 20 of them for nearly all new hires. 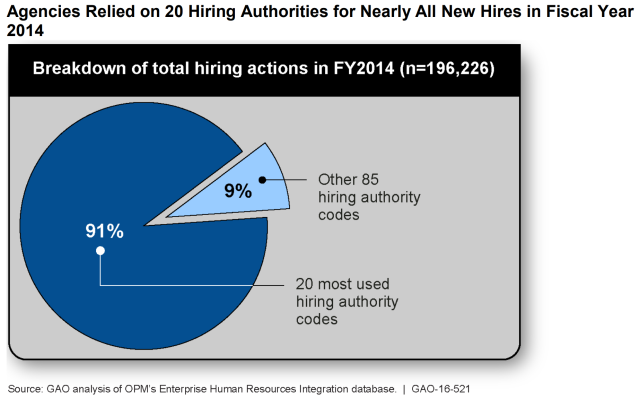 Earlier this year, we blogged about how federal agencies may also provide special payments in certain circumstances to hire people with needed critical skills. Our report found that in 2016, federal managers were seldom using these special payments, such as retention and relocation incentives or student loan repayments. 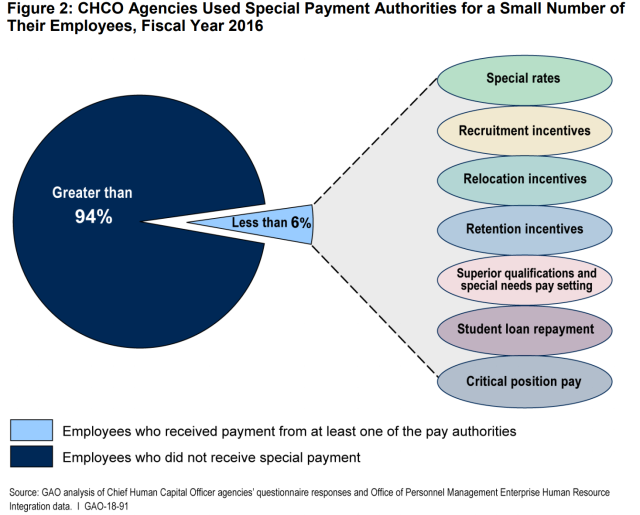 Another change that would support the federal workforce would be to reexamine the way that federal employees are hired and paid. Last year, we testified that it is important for agencies to make better use of the tools already at their disposal, such as using more flexibility in their hiring practices. Acting on our findings could significantly improve the government’s personnel management system and help agencies better carry out their missions.

We will continue to monitor both broader government-wide efforts at implementing CSRA as well as to present opportunities for agencies to improve their human capital management to ensure they are consistent with the spirit of the CSRA.