A hiring authority is the law, executive order, or regulation that allows an agency to hire a person into the federal civil service. Of the 105 hiring authorities used in fiscal year 2014, agencies relied on 20 for 91 percent of the 196,226 new appointments made that year. Office of Personnel Management (OPM) officials said they do not know if agencies rely on a small number of authorities because agencies are unfamiliar with other authorities, or if they have found other authorities to be less effective. The competitive examining hiring authority, generally seen as the traditional method for federal hiring, was the single most used authority in fiscal year 2014, but accounted for less than 25 percent of all new appointments. 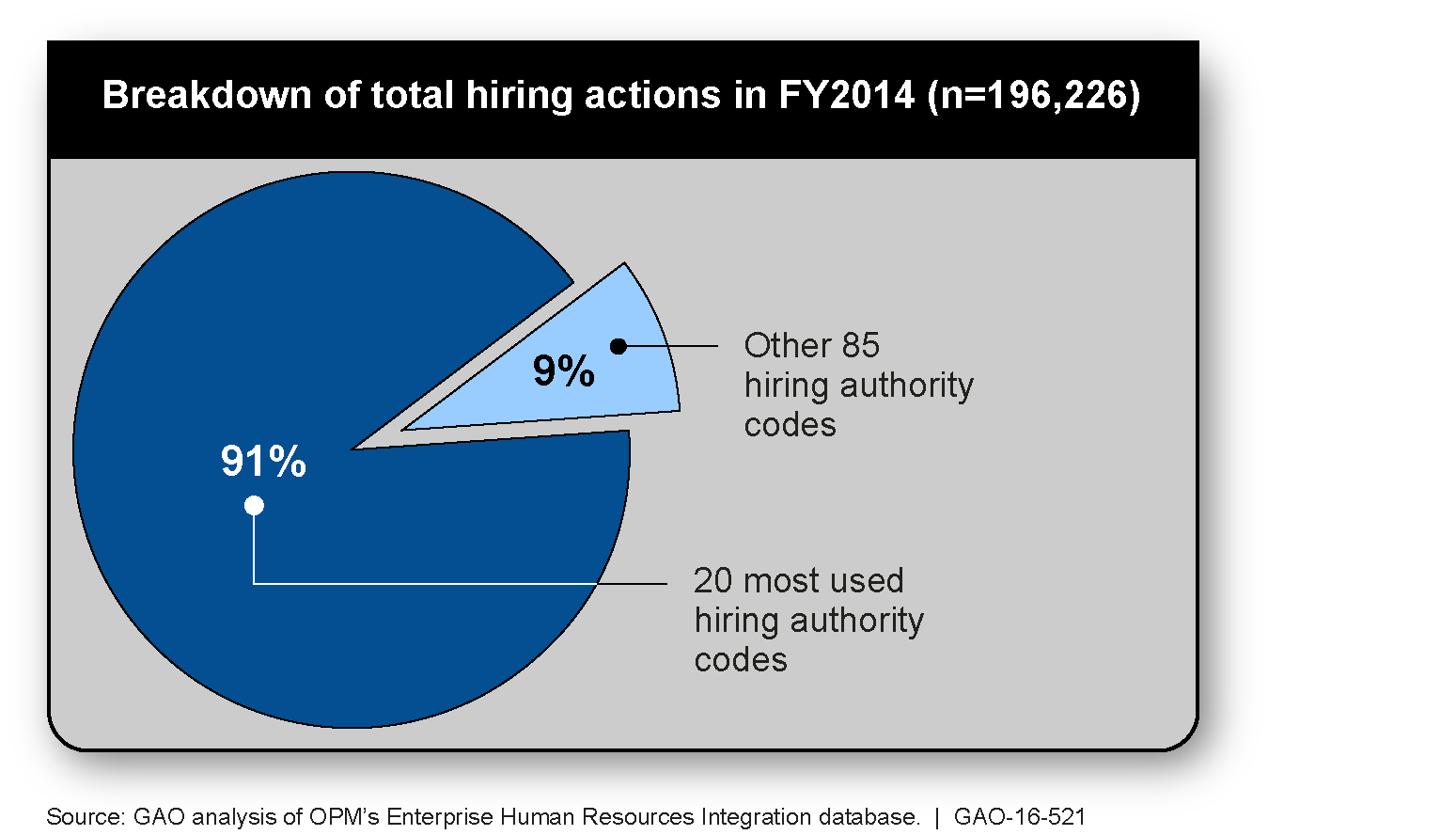 While OPM—the agency responsible for overseeing the delegated hiring authority and managing federal civilian personnel data—tracks data on agency time-to-hire, manager and applicant survey results, and compliance audits to assess the hiring process, this information is not used by OPM or agencies to analyze the effectiveness of hiring authorities. As a result, OPM and agencies do not know if authorities are meeting their intended purposes. By analyzing hiring authorities, OPM and agencies could identify improvements that could be used to refine authorities, expand access to specific authorities found to be highly efficient and effective, and eliminate those found to be less effective.

OPM's Hiring Excellence Campaign consists of a number of multi-agency, in-person events and is OPM's latest initiative designed to address long-standing challenges with federal hiring. OPM officials described the objectives, strategies, and measures by which the campaign will be measured and sustained. Going forward it will be important for OPM to sustain the campaign's efforts and incorporate lessons learned, if any, from similar prior or existing efforts to improve federal hiring.

Federal agencies face human capital challenges as a large percentage of employees become eligible to retire and agencies compete with the private sector for critical skills. To acquire needed talent, agencies need a hiring process that is applicant friendly, flexible, and meets policy requirements, such as hiring on the basis of merit.

To meet these objectives, GAO analyzed OPM data and documents, and interviewed OPM and officials from three agencies selected on the basis of recent high hiring levels in critical skill occupations.

GAO recommends that the Director of OPM, working with agencies, strengthen hiring efforts by (1) analyzing the extent to which federal hiring authorities are meeting agencies' needs; (2) using this information to explore opportunities to refine, eliminate, or expand authorities as needed, and (3) sustain the Hiring Excellence Campaign's efforts to improve agency hiring and leverage prior initiatives, as appropriate. OPM generally concurred with these recommendations.