Since we last reported on NASA's plans to return humans to the moon by 2024, NASA has made some progress.

But a fast-tracked schedule to meet this ambitious date—along with some technical risks—mean that it's less likely a lunar landing will happen in 2024. For example, most of the lunar projects are still early in development and some are relying on immature technology.

In addition, a 2020 NASA study recommended changes to the management structure for the lunar programs. We made 4 recommendations to NASA in this report, including to take further action in response to that study.

Artist Rendering of the First Two Components of the Gateway Outpost, Targeted to Launch Together in 2024 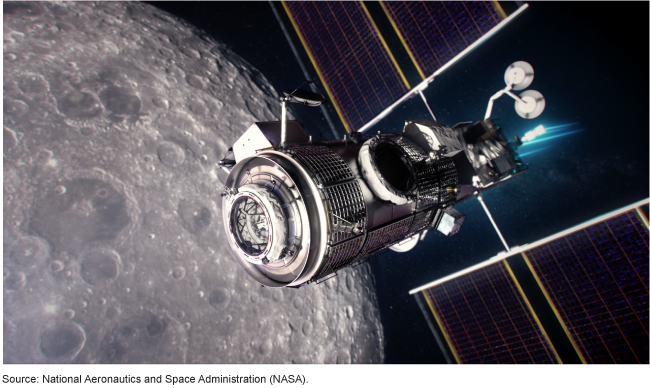 The National Aeronautics and Space Administration (NASA) has initiated eight lunar programs since 2017 to help NASA achieve its goal of returning humans to the Moon. NASA plans to conduct this mission, known as Artemis III, in 2024. NASA has made progress by completing some early lunar program development activities including initial contract awards, but an ambitious schedule decreases the likelihood of NASA achieving its goal. For example, NASA's planned pace to develop a Human Landing System, shown below, is months faster than other spaceflight programs, and a lander is inherently more complex because it supports human spaceflight.

NASA also faces technical risks. For example, the Gateway—which NASA is developing to be an outpost orbiting the Moon—will rely on power and propulsion technology that has never before been used, and contractor efforts to develop the technology are behind schedule. NASA officials said they do not have a technology backup that would meet mission requirements. GAO best practices for technology assessments state that if a technology is not adequately mature, management should assess off-ramps at milestones. For this program, off-ramps would include potentially reducing the amount of power the system is required to provide to the Gateway or reassessing the schedule to allow for more time to develop the technology. NASA risks costly design changes or delays if the agency does not identify off-ramps before committing significant resources.

NASA has not fully addressed management challenges related to its lunar programs that were identified in a 2020 NASA-sponsored study. For example, GAO found that NASA assigned Artemis mission roles and responsibilities to specific divisions in response to a study finding; however, the agency has not clearly documented how it determined what key programmatic and technical tools it plans to use to guide mission decision-making. Without doing so, NASA cannot ensure that it has the appropriate processes in place to track how the missions will achieve objectives and address risks at the mission level.

In March 2019, the White House directed NASA to accelerate its plans for a lunar landing by 4 years, to 2024. Accomplishing this goal will require extensive coordination across lunar programs and contractors to ensure systems operate together seamlessly and safely. In December 2019, GAO found that NASA had begun making decisions related to requirements, cost, and schedule for individual lunar programs but was behind in taking these steps for the Artemis III mission.

The House Committee on Appropriations included a provision in 2018 for GAO to review NASA's proposed lunar-focused programs. This is the second such report. This report assesses the extent to which NASA has (1) made progress on its lunar programs, including for the 2024 lunar landing goal, and (2) addressed challenges related to its management of lunar programs.

GAO analyzed lunar mission and program documents and assessed the results of a 2020 NASA-sponsored study on lunar program status. GAO interviewed NASA officials on lunar program progress and risks and on plans to address study findings.

GAO is making four recommendations, including that NASA assess off-ramps for an immature Gateway technology and document the process for determining key programmatic and technical tools for the Artemis missions. NASA concurred with three of the recommendations, but did not concur with the fourth, which related to the costs included in a lunar rover's cost estimate. GAO believes this recommendation remains valid.