In March 2019, the White House directed NASA to accelerate its plans to return humans to the moon by 2024—4 years earlier than NASA had planned.

To meet this new goal, NASA made some changes to its approach. But it is still pursuing an array of complex efforts, including a small platform in lunar orbit called the Gateway, where crew could transit to and from the moon. Some have questioned the path NASA is taking and NASA has not fully explained how it arrived at its plans. So we recommended that NASA document its rationale for these decisions.

We also recommended that NASA develop an official cost estimate for the 2024 lunar landing mission.

A Potential Configuration of the Systems Needed for 2024 Moon Landing 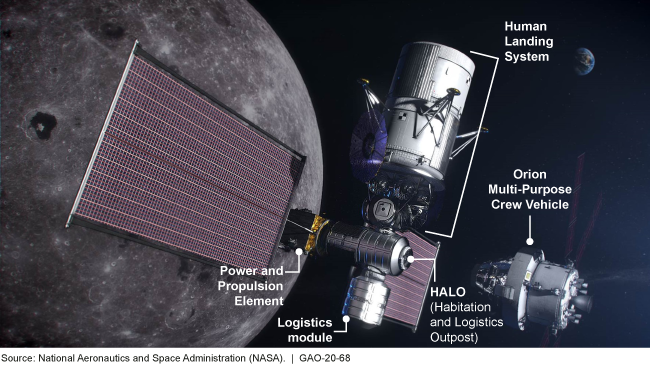 Illustration of components of potential moon landing system and the moon

To support accelerated plans to land astronauts on the moon by 2024—four years earlier than planned—the National Aeronautics and Space Administration (NASA) quickly refocused its acquisition plans. In particular, NASA separated its lunar plans into two phases, with the first phase focused on the systems NASA identified to support the new timeline (see figure). One system, Gateway, includes three components—power and propulsion, habitation, and logistics—to form a small platform in lunar orbit.

NASA has begun making decisions related to requirements, cost, and schedule for programs, but is behind in taking these steps for the whole lunar mission:

NASA risks the discovery of integration challenges and needed changes late in the development process because it established some requirements for individual lunar programs before finalizing requirements for the overall lunar mission. NASA plans to take steps to mitigate this risk, such as by holding reviews to ensure that requirements align across programs, but has not yet defined these reviews or determined when they would occur.

NASA has made some decisions that will increase visibility into the costs and schedules for individual lunar programs, but does not plan to develop a cost estimate for the first mission. Cost estimates provide management with critical cost-risk information to improve control of resources. Without a cost estimate for this mission, Congress will not have insight into affordability and NASA will not have insight into monitoring total mission costs.

NASA conducted studies to inform its lunar plans, but did not fully assess a range of alternatives to these plans. GAO best practices state that analyzing alternatives provides a framework to help ensure that entities consistently and reliably select the alternative that best meets the mission need and justify agency decisions. Given NASA's schedule, conducting this analysis is no longer viable. Instead, NASA intends to create a summary of the studies that informed its lunar plans. However, it has not committed to a completion date. Without a documented rationale, NASA is ill-positioned to effectively communicate its decisions to stakeholders and facilitate a better understanding of its plans.

In March 2019, the White House directed NASA to accelerate its plans to return humans to the moon by 4 years, to 2024. To accomplish a lunar landing, NASA is developing programs including a small platform in lunar orbit, known as Gateway, and a lunar lander. NASA plans to use the Space Launch System and Orion crew capsule—two programs with a history of cost growth and schedule delays—to launch and transport crew to Gateway.

The House Committee on Appropriations included a provision in its 2018 report for GAO to review NASA's proposed lunar-focused programs, including the Gateway program. GAO's report assesses (1) how NASA updated its lunar plans to support the accelerated 2024 landing timeline; (2) the extent to which NASA has made initial decisions about requirements, cost, and schedule for its lunar mission and programs; and (3) the extent to which NASA analyzed alternatives for its lunar plans, including the Gateway program. GAO analyzed NASA lunar mission and program documents, assessed NASA studies that informed NASA's lunar plans, and interviewed NASA officials.

GAO is making a total of 6 recommendations to NASA, including to define and schedule reviews that align requirements across lunar programs; create a cost estimate for the first lunar mission; and commit to a completion date and finalize a cohesive document outlining the rationale for selecting its current lunar plans. NASA concurred with the recommendations made in this report.