Soon, DOD will decide when it can officially end development and begin full production of the F-35.

However, we testified that DOD still hasn't fully addressed issues we've raised in the past, like supply chain problems. In addition, delays in developing the aircraft simulator have, again, delayed testing and the production decision.

Also, while DOD has had cost increases and schedule delays in the F-35 baseline program, the F-35's hardware and software modernization effort (known as "Block 4") is having similar problems.

In a March report, our 3 recommendations included one on updating the Block 4 schedule to reflect achievable time frames.

An F-35B exercising its short takeoff and vertical landing capability on the USS America. 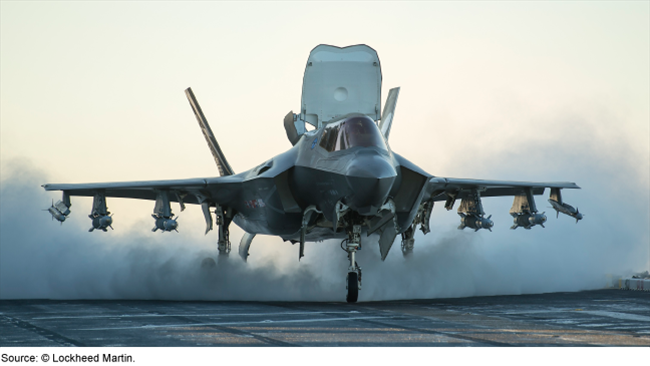 While the Department of Defense (DOD) approaches its full-rate production decision point (which would formally authorize DOD's transition from development to full production), the F-35 program is producing nearly 25 percent of the total planned aircraft in low-rate initial production before satisfying the criteria for full-rate production. As it approaches this major milestone, the program has taken steps to but has not fully addressed a number of challenges, even though GAO recommended that it do so, such as the need to:

Compounding these production issues is the fact that the program has not completed operational testing on the aircraft to ensure warfighters get the capabilities they require, primarily due to increasing delays with the aircraft simulator. In August 2020, the program office determined the simulator—to be used to replicate complex test scenarios that could not be accomplished in real-world environment testing—did not fully represent F-35 capabilities and could not be used for further testing until fixed. Since then, program officials have been developing a new plan to ensure the simulator works as intended. Until this happens, the full-rate production date remains undetermined (see figure).

At the same time that the program is resolving risks with the baseline program, DOD is encountering similar cost and schedule increases with its F-35 modernization effort. In the 3 years of Block 4 capability development, the total estimated cost of Block 4 increased from $10.6 billion to $14.4 billion. This increase is, in part, a recognition of all costs, past and future, estimated to be required to complete the effort. As GAO recommended in May 2020, DOD now reports all Block 4 costs, not just those associated with the near term. While DOD added another year to the Block 4 schedule, in March 2021 GAO found the remaining development time frame is not achievable. Unless the F-35 program accounts for historical performance in the schedule estimates, the Block 4 schedule will continue to exceed estimated time frames and stakeholders will lack reliable information on when the modernized capabilities will be delivered.

The F-35 Lightning II Joint Strike Fighter program began development in 2001 and remains DOD's most expensive weapon system program. Currently, the program is more than 8 years delayed and $165 billion over original cost expectations. As the program progresses toward completing operational testing of the aircraft's baseline capabilities, it still faces risks. DOD is also 3 years into an effort, called Block 4, to modernize the F-35 aircraft's capabilities. Block 4 is loosely based on Agile software development processes. With this approach, DOD intends to incrementally develop, test, and deliver small groups of new capabilities every 6 months.