The F-35 program continues to face operational testing delays. The Department of Defense has not finished developing the aircraft simulator, which delayed testing and again delayed the decision on when to start full production.

We also found the program's schedule for its hardware and software modernization effort, known as "Block 4," was not realistic. The DOD routinely underestimated the amount of work needed to develop "Block 4" capabilities, resulting in additional schedule delays.

We made 3 recommendations, including one to help the DOD update its schedule to reflect achievable time frames. 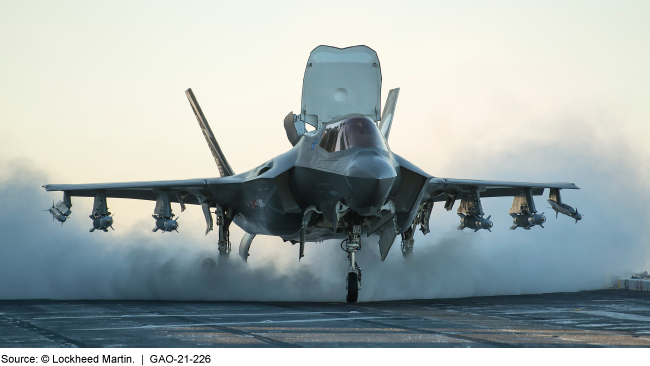 The Department of Defense (DOD) delayed the completion of key testing until problems with the F-35 aircraft simulator are resolved, which GAO also reported last year, and will again delay its full-rate production decision. In August 2020, the program office determined the aircraft simulator—to be used to replicate complex test scenarios that could not be accomplished in real-world environment testing—did not fully represent F-35 capabilities and could not be used for further testing until fixed. Since then, program officials have been developing a new plan to ensure the simulator works as intended. Until they finalize the plan and fix the simulator, the next production milestone date—which would formally authorize DOD's transition from development to full production—remains undetermined (see figure).

DOD is now in its third year of its modernization effort, known as Block 4, to upgrade the hardware and software of the aircraft. While DOD added another year to the schedule, GAO found the remaining development time frame is not achievable. The program routinely underestimated the amount of work needed to develop Block 4 capabilities, which has resulted in delays, and has not reflected historical performance into its remaining work schedule. Unless the F-35 program accounts for historical performance in the schedule estimates, the Block 4 schedule will continue to exceed estimated time frames and stakeholders will lack reliable information on when capabilities will be delivered.

The F-35 Lightning II Joint Strike Fighter program remains DOD's most expensive weapon system program. DOD is 3 years into a development effort that is loosely based on Agile software development processes to modernize the F-35 aircraft's capabilities. With this approach, DOD intends to incrementally develop, test, and deliver small groups of new capabilities every 6 months. Congress included provisions in two statutes for GAO to review the F-35 program.