NASA is awarding billions of dollars in contracts for future flights, but keeps changing its schedules and plans for system upgrades to support these flights. We recommended NASA increase oversight measures for these upgrades following Artemis I. 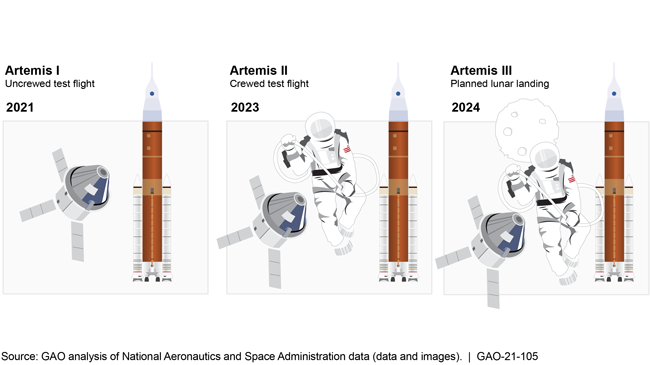 The National Aeronautics and Space Administration (NASA) again delayed the planned launch date for Artemis I, the first uncrewed test flight involving three closely related human spaceflight programs—the Orion crew vehicle, Space Launch System (SLS), and Exploration Ground Systems (EGS). Together, these programs aim to continue human space exploration beyond low-Earth orbit. The most recent delay, to November 2021, resulted in part from manufacturing challenges and represents a 36-month slip since NASA established a schedule to measure performance in 2014. This new launch date does not account for the effects of COVID-19. According to NASA officials, COVID-19 delays and schedule risks will place pressure on NASA's ability to achieve this launch date.

Development cost estimates for key programs also increased. The cost of the SLS program increased by 42.5 percent and the EGS program by 32.3 percent since 2014, for a combined increase of over $3 billion, bringing the total to $11.5 billion. NASA does not plan to complete revised estimates for Orion, which are tied to the second, crewed test flight (Artemis II) before spring 2021. 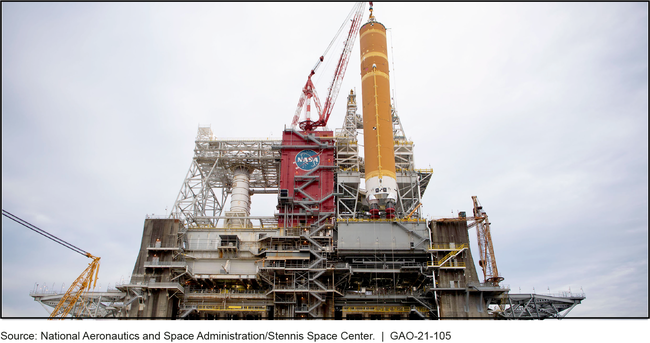 NASA awarded billions of dollars in development and production contracts to support flights beyond Artemis I, but the flight schedule has changed frequently due to a lack of clear requirements and time frames for planned capability upgrades. Limited NASA oversight also places efforts to plan and execute future flights at risk of adverse outcomes, such as increased costs or delays. For example, NASA is committed to establishing cost and schedule performance baselines for these efforts, but it plans to do so too late in the acquisition process to be useful as an oversight tool. In addition, senior leaders do not receive consistent and comprehensive information at quarterly briefings on future efforts, such as a program to begin developing a more powerful upper stage for SLS. This is because current updates provided to NASA management focus primarily on the more short-term Artemis I and II flights. This approach places billions of dollars at risk of insufficient NASA oversight.

NASA is pursuing an aggressive goal to return American astronauts to the surface of the Moon by the end of 2024. The success of NASA's plans hinges, in part, on two upcoming test flights. An uncrewed test flight and subsequent crewed test flight are intended to demonstrate the capability of a new launch vehicle, crew capsule, and ground systems.

The House Committee on Appropriations included a provision in its 2017 report for GAO to continue to review NASA's human space exploration programs. This is the latest in a series of GAO reports addressing this topic. This report assesses (1) the progress the programs are making towards the first test flight, known as Artemis I, with respect to schedule and cost, and (2) the extent to which NASA's human space exploration programs are positioned to support the planned Artemis flight schedule beyond Artemis I.

To do this work, GAO examined program cost and schedule reports, test plans, and contracts, and interviewed officials. GAO also assessed the extent to which the COVID-19 state of emergency has affected schedules for these programs.

GAO is making two recommendations to NASA to establish baselines ahead of a key design review and improve internal reporting about capability upgrades for human space exploration programs beyond Artemis I. NASA concurred with the recommendations made in this report.