In our 11th annual Quick Look at the status of NASA's major projects, we found ongoing cost increases and delays—similar to last year. NASA's acquisition management has been on our High Risk List.

NASA hasn't been able to meet its cost and schedule goals on some of its costliest programs, like the James Webb Space Telescope and human spaceflight efforts.

Now these programs are staying in the portfolio longer than planned as NASA is starting new efforts, such as going back to the Moon. Going forward, this is going to strain NASA's budget. NASA will have to either increase its annual funding request or make tradeoffs between projects.

The James Webb Space Telescope is one of the NASA projects that has experienced cost increases and delays. 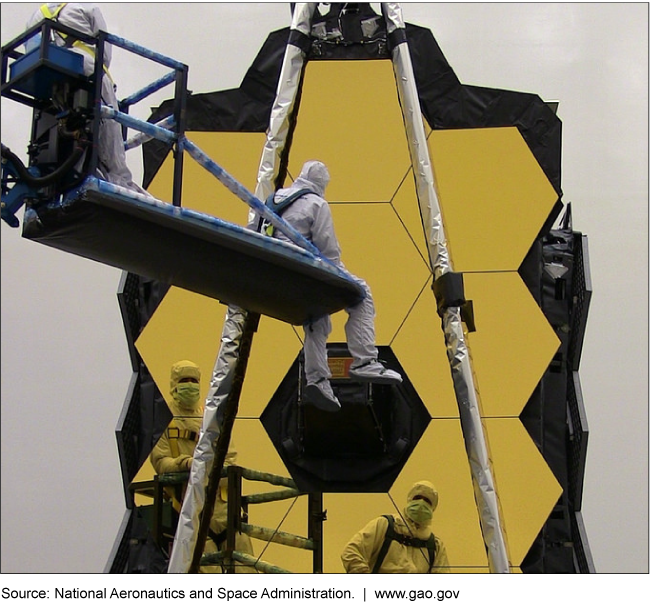 The cost and schedule performance of the National Aeronautics and Space Administration's (NASA) portfolio of major projects continues to deteriorate. For this review, cost growth was 27.6 percent over the baselines and the average launch delay was approximately 13 months, the largest schedule delay since GAO began annual reporting on NASA's major projects in 2009. See figure.

Note: Data is as of June 2018 with some exceptions. For example, data was updated for projects that held decision reviews subsequent to that date but before the end of the calendar year 2018.

This deterioration in cost and schedule performance is largely due to integration and test challenges on the James Webb Space Telescope (see GAO-19-189 for more information). The Space Launch System program also experienced significant cost growth due to continued production challenges. Further, additional delays are likely for the Space Launch System and its associated ground systems. Senior NASA officials stated that it is unlikely these programs will meet the launch date of June 2020, which already reflects 19 months of delays. These officials told GAO that there are 6 to 12 months of risk associated with that launch date.

GAO found some subjectivity in the processes NASA uses to identify and assess critical technologies—those that are required for the project to successfully meet customer requirements—which could understate the development risk that its major projects face. The average number of critical technologies NASA reported increased slightly in 2019, but remains low compared to historical data. However, GAO found inconsistencies in how projects identify critical technologies. For example, the Lucy project determined that operating its solar array in a previously unexplored environment did not warrant identifying it as a critical technology, while the Ionospheric Connection Explorer (ICON) project did identify a technology as critical because of its use in a new environment. NASA is planning to clarify its guidance on technology readiness, among other measures. GAO will continue to monitor NASA's efforts in this area.

This report provides GAO's annual snapshot of how well NASA is planning and executing its major acquisition projects. GAO previously found that, as of February 2018, the cost and schedule performance of major projects was deteriorating, with 9 of 17 projects in development reporting cost or schedule growth. GAO also found that NASA was likely to continue to see cost and schedule growth, as new, large projects were entering the portfolio while others were taking longer to launch than planned.

The explanatory statement of the House Committee on Appropriations accompanying the Omnibus Appropriations Act, 2009 included a provision for GAO to prepare status reports on selected large-scale NASA programs, projects, and activities. This is GAO's 11th annual assessment. This report assesses (1) the cost and schedule performance of NASA's major projects and (2) the maturity of critical technologies, among other issues. This report also includes assessments of 21 of NASA's 24 major projects, each with a life-cycle cost of over $250 million using 2018 data. This report does not assess what effect, if any, the government shutdown that ended in January 2019 had on performance. To conduct its review, GAO analyzed cost, schedule, technology maturity, and other data; reviewed project status reports; and interviewed NASA officials.