The nomination came as a surprise to many involved—including Campbell. As part of our latest look back at GAO history, today’s WatchBlog shares Campbell’s legacy.

Unlike previous Comptrollers General, Joseph Campbell was not an attorney. After serving briefly in the U.S. Army during World War I, he graduated from Columbia University and worked in public accounting at private firms in New York City.

He later returned to Columbia, first working as the Assistant Treasurer and then Vice President of the university. During this time, Campbell became well acquainted with Eisenhower, then president of Columbia.

At the time of his nomination, Campbell was a member of the Atomic Energy Commission, and was considering resigning from it to return to Columbia. When he told Eisenhower about his plans, the President asked him if he would like to become Comptroller General.

Although Eisenhower’s nomination came as a surprise to Campbell—and to many others since he had not been considered a possible candidate—he wholeheartedly accepted the nomination on September 30, 1954.

An independent GAO = No bowling with audited agencies

Campbell, like the first Comptroller General John R. McCarl, felt very strongly about safeguarding GAO’s independence. During his term of more than a decade, Campbell maintained a strict distance from the executive agencies GAO audits and investigates.

In fact, one senior GAO manager at the time commented that, after Campbell became Comptroller General, “you could not socialize with the agency people. You sure couldn’t socialize with any of their contractors”—which this official learned when his staff joined a bowling league at the Bureau of Public Roads. Campbell heard about the league and confronted the manager, who later recounted the conversation:

“[Campbell] asked me whether I wanted a career as a bowler or an accountant. I told him I wanted to be an accountant. He said “Okay, then get your crew out of that bowling league,” which we immediately did.” 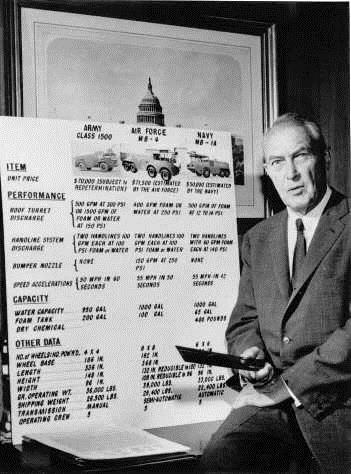 Adding up the savings for Congress

Campbell also started measuring GAO’s assistance to Congress in terms of quantitative accomplishments—such as reports issued, testimonies given, and money saved. In 1962, he reported that GAO saved nearly $162,875,000, a return of $4 for every $1 invested in the agency. Today, we continue to report on our accomplishments. But now we return about $124 for every dollar invested in us.

At one congressional hearing, the ranking representative from Texas at the time said:

“I don’t know of any agency of the Government that the Congress feels any closer to than the General Accounting Office. Certainly there is good reason for that...Congress feels whenever it wants exact information where the chips will fall where they may, we can always depend upon the reports and investigations and the invaluable help of the General Accounting Office.”

And we continue to provide such insights.

Campbell retired from his position in 1965 due to rheumatoid arthritis. Because of his poor health, his departure from GAO was quiet. However, the press praised his time as Comptroller General. The Albuquerque Tribune, described him as “tough, inquisitive, independent.” The Chicago Sun-Times wrote that his retirement was “sad news for the American taxpayer.”

After his retirement, Campbell’s health improved. Eventually, he and his wife settled in Sarasota, Florida where he died at the age of 84 on June 21, 1984.

Where can Government Save Money? We’ve Found More than Half a Trillion Dollars in Potential Savings

How, specifically, can the federal government save billions of dollars and also improve the way many...
Read the post Is the Cloud Saving the Government Money?

Have you ever wondered how the federal government provides important public services—like helping...