Skip to main content
Following the short tenure of our second watchdog-in-chief, Lindsay C. Warren stepped into the role of U.S. Comptroller General. Today’s WatchBlog shares his legacy and why some rated him the “Best Watchdog in Show.” Life before GAO Born December 16, 1889, in Washington, North Carolina, Warren would take after his father—a lawyer, and grandfather, a politician. But he would also distinguish himself rather early. Warren at times struggled to finance his studies at the University of North Carolina. So he built a roulette wheel. The dean of the school eventually confiscated it, but also praised Warren for his mathematical acumen—the wheel he built made it impossible for the gambler to win. Forced to earn money more legitimately—if less creatively—Warren worked at a bank, then returned to UNC to study law. Soon after passing the bar in 1912, he became active in democratic state politics. In 1924, he was elected to represent North Carolina in the U.S. House of Representatives. Perhaps foreshadowing his future career, he was chairman of the Committee on Accounts for 10 years. President Franklin D. Roosevelt nominated Warren to be Comptroller General three times before Warren ultimately accepted. He was officially appointed in the summer of 1940. Creating the independent agency you know today Warren’s time at GAO spanned U.S. involvement in World War II, the Cold War, and the Korean War. Amid all the tumult, he and others were focused on improving the financial management of the federal government, as we still are today. Warren significantly increased the scope and pace of the work at GAO to help address the federal government’s financial challenges. He wrote to President Roosevelt in 1942:

I get up every morning at 6:30am, eat no lunch, never the leave the building unless called on official business and get home late…The work of the General Accounting Office has increased over 100% in the last two years, and we think we are playing a vital part in the war effort

He also planned and supervised GAO’s transformation from a voucher-checking agency to one that issued substantive, comprehensive audit reports, like the ones you’re familiar with today. But perhaps more important than the changes to the type and amount of work done, was how Warren expanded and improved the agency’s relationship with Congress. He did this in part because of his experience in the House. He also saw this as a way to protect GAO from executive branch efforts to change the agency’s role and function. Ultimately, Warren cemented GAO’s status as a legislative agency and fought executive proposals to change the agency’s work and organization. “Best Watchdog in Show” Like his predecessor 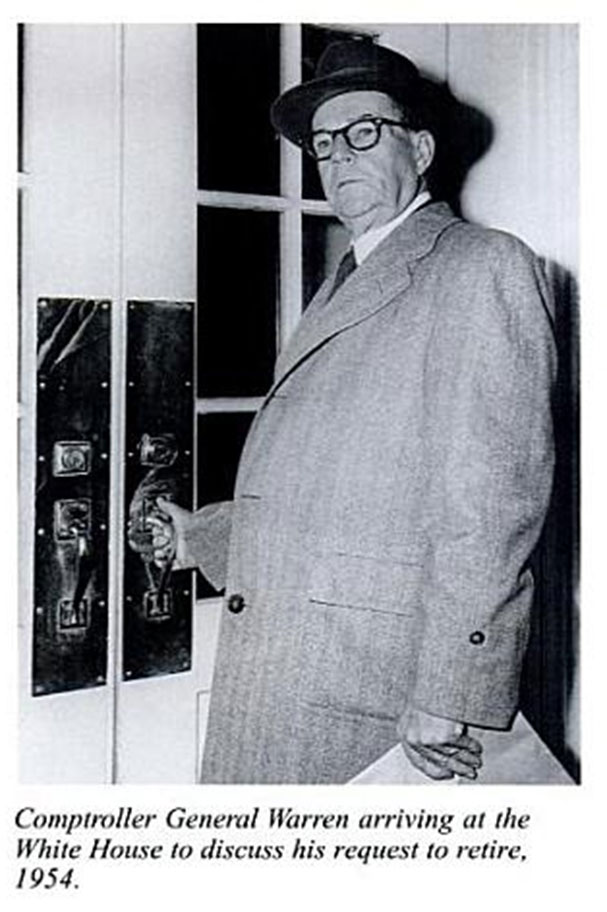 , Warren retired from his position early due to health problems. Unlike his predecessor, Warren made it almost to the end of the 15-year term for comptrollers general. After nearly 13 and a half years at GAO, he left his post in the spring of 1954. Following his retirement, the Baltimore Evening Sun observed that Warren was much less cantankerous than GAO’s first comptroller general, John R. McCarl, and brought an “old-fashioned conception of honesty and a rugged capacity to stand up to pressure from others without being offensive.” Many believe that under his administration, GAO won much wider esteem, so much so that the Washington Star wrote that Warren rates “a blue ribbon: Best watchdog in show.”
Read the post