Every year, we look at NASA’s major projects to see how well they’re making progress against their cost and schedule goals—which we call our “Quick Look” review.

This year, these projects included a satellite that will study polar ice sheets, a lander that will collect data on Mars’s crust, and a project planning to demonstrate that sonic booms can be lowered to levels acceptable for commercial use of supersonic flight. All of these projects have life-cycle costs estimated to be at least $250 million.

Listen to our podcast, then read on for more.

What did we find?

For the past few years, we found that costs were still increasing for some projects but that the overall rate of cost growth had slowed down. And the estimates of how long it would take to finish projects were largely staying the same. But this year, as noted in our report, the trend turned around—both cost and schedule were on the rise. 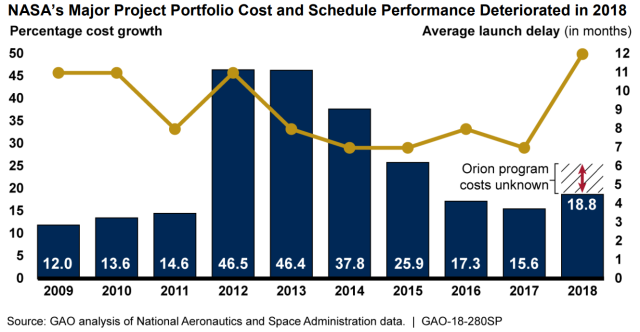 The average launch delay of projects in the portfolio was 12 months, the most we’ve ever reported. Last year, the delay average was 7 months.

Why the drop-off in performance?

Of the 17 projects in our report that had established performance goals, 9 reported cost or schedule growth this year.

Can NASA turn it around?

We did see NASA focus more attention this year on preventing this type of growth before it starts. For example, NASA directed the WFIRST project, another telescope that is early in its life cycle, to reduce costs and complexity in response to findings from an independent review.

However, NASA’s cost and schedule growth isn’t likely to drastically improve anytime soon. The schedule delays mean that these larger projects are spending more time in the portfolio than planned. NASA also has lots of new, complex projects that are just starting up, like a project that will try to determine whether Jupiter’s moon Europa could be inhabitable. As these new projects begin development, NASA is at risk of continued cost increases and schedule delays in the future. Is the Cloud Saving the Government Money?

Have you ever wondered how the federal government provides important public services—like helping...
Read the post Today we released our 9th annual report on fragmentation, overlap, and duplication in the federal...