In our annual Quick Look at the status of NASA's major projects, we found that most of the agency's projects are being executed within their cost and schedule estimates. However, a third of these projects, including two of the most expensive ones (the Orion crew vehicle and Space Launch System), are at a stage when problems are most likely to occur.

NASA is also improving project management tools but faces workforce and funding challenges that could affect its costs and schedules. 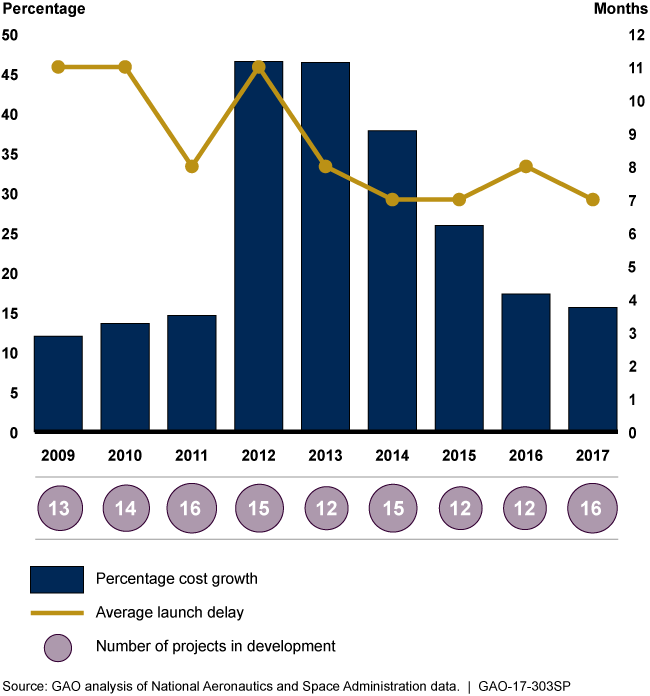 Graphic showing that cost and schedule performance of NASA's major projects have improved.

The cost and schedule performance of the National Aeronautics and Space Administration's (NASA) portfolio of major projects continued to improve, as shown in the figure below, but this trend may be difficult to sustain. The current trend is driven by two main factors: (1) most projects are being executed within their cost and schedule baselines; and (2) new projects, which are less likely to have experienced cost and schedule growth, were added to the portfolio. However, two projects—a Mars seismology instrument and lander and an upgrade to the NASA's space communications network—experienced significant cost or schedule growth in 2016. In addition, eight projects are in the phase of development when cost and schedule problems are most likely to occur, including the Orion Multi-Purpose Crew Vehicle and Space Launch System, NASA's most expensive human spaceflight programs.

NASA has generally maintained recent improvements in the technology maturity and design stability of its projects, even as the number of new technologies in its most recent projects has increased. Three of the four major projects that passed preliminary design review in the past year matured all technologies to the level recommended by GAO best practices. Several NASA projects experienced late design changes, but the overall level of these changes remained relatively low and other design stability measures remained unchanged.

NASA continues to improve project management tools to manage acquisition risks but faces workforce and funding challenges. NASA has not implemented a best practice for monitoring contractor performance, as GAO recommended in November 2012, due to resource constraints. Other NASA workforce analyses have identified gaps in key areas, such as scheduling. NASA dissolved its independent assessment office in October 2015, in part to bolster its mission directorate and center workforces. GAO is monitoring the effect this change could have on project oversight. Finally, several major projects experienced funding-related challenges, such as working to schedules that were not supported by NASA's budget plans, which could affect cost and schedule performance.

This report provides GAO's annual snapshot for 2017 of how well NASA is planning and executing its major acquisition projects. In March 2016, GAO found that projects continued a general positive trend of limiting cost and schedule growth, maturing technologies, and stabilizing designs, but that NASA faced several challenges that could affect its ability to effectively manage its portfolio.

The explanatory statement of the House Committee on Appropriations accompanying the Omnibus Appropriations Act, 2009 included a provision for GAO to prepare status reports on selected large-scale NASA programs, projects, and activities. This is GAO's ninth annual assessment. This report describes (1) the cost and schedule performance of NASA's portfolio of major projects, (2) the maturity of technologies and stability of project designs at key milestones, and (3) NASA's progress in implementing initiatives to manage acquisition risk and potential challenges for project management and oversight. This report also includes assessments of NASA's 21 major projects, each with a life-cycle cost of over $250 million. To conduct its review, GAO analyzed cost, schedule, technology maturity, design stability, and other data; reviewed monthly project status reports; and interviewed NASA officials.

A “Quick Look” at DOD, NASA, and DHS Acquisitions

For the past 15 years, we’ve been reviewing the federal government’s largest acquisition programs in...
Blog Post