Each year, tens of thousands of foreign nationals in the United States apply for asylum, which provides refuge for those unable or unwilling to return to their home country for various reasons. For example, they may have faced past persecution in their country, or fear future persecution based on their race, religion, nationality, social status, or political opinion.

There are two types of asylum claims decided by immigration courts within the Department of Justice:

If granted asylum, an applicant may be eligible for federal, state, and local benefits; is authorized for employment; and can become a U.S. lawful permanent resident after one year. 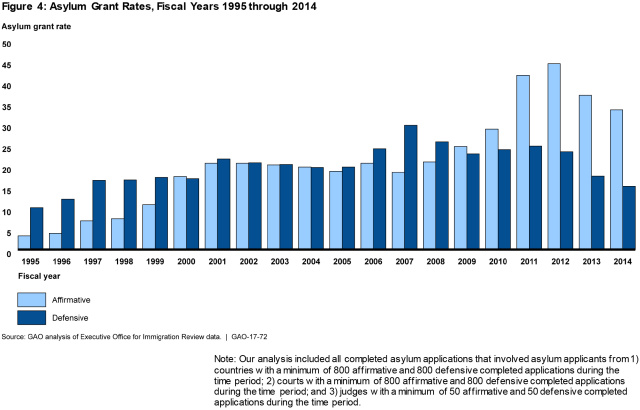 Grant rates also varied across judges and courts based upon location. For example, immigration court judges in New York, New York, granted over 50 percent of both affirmative and defensive applications, while judges in Atlanta, Georgia, and Omaha, Nebraska, granted less than 5 percent of both types of applications.  And within the New York court, judges granted asylum from a minimum of rate of 22 percent to a maximum rate of 83 percent for affirmative applicants.

Each year, tens of thousands of foreign nationals in the United States apply for asylum, which...
Read the post

On any given day, more than 30,000 people are held in an Immigration and Customs Enforcement...
Read the post

Tens of thousands of people apply for asylum in the United States each year. Asylum officers review...