Earthquake preparedness helps protect lives and property from the devastation that earthquakes can cause. It’s particularly important for earthquakes that are difficult to predict or arrive with little warning.

The Great ShakeOut Earthquake Drills are happening tomorrow—are you prepared? To help, the WatchBlog explores ShakeAlert, the earthquake early warning system, and other efforts to prep for quakes.

Not just a west side story

While severe earthquakes have occurred frequently in California, the risk of earthquakes is present in many parts of the United States. Over 240 million Americans live in areas vulnerable to at least a moderate earthquake hazard—including almost 405,000 federal employees who work in federal buildings in areas where strong to extreme shaking can occur. 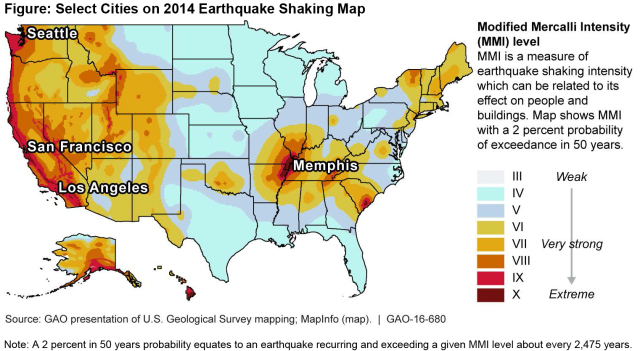 Can technology help save the day?

Having even just a few seconds of warning before an earthquake hits can help protect lives. ShakeAlert can identify and characterize an earthquake a few seconds after it begins, calculate the likely intensity of ground shaking, and deliver warnings to people and infrastructure in harm’s way. This early warning system can detect earthquakes so quickly that an alert can reach some areas before strong shaking occurs. 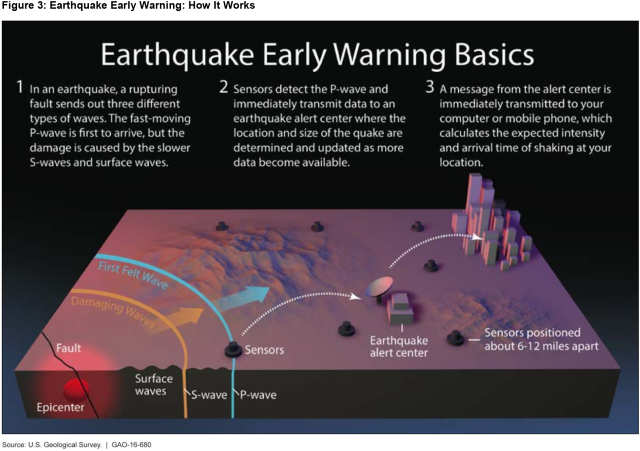 The federal government, along with western state governments, academic institutions, and various seismic networks, are working together to expand this early warning system—which is currently in beta testing in the western United States. Listen to Chris Currie, a director in our Homeland Security and Justice team, talk about the ShakeAlert system:

Is the government prepared?

While early warning systems play an important role in earthquake preparedness, assessing and mitigating seismic risks prior to earthquakes is also crucial.

We have reported that the Department of Defense and the General Services Administration—who are responsible for about 72 percent of the building space owned or leased by the federal government—could do more to reduce the risk of earthquake damage to federal buildings. For example, a federal initiative in the 1990s identified approximately 2,900 federal buildings at exceptionally high-risk for damage from earthquakes. The initiative also estimated that $22.9 billion was needed to retrofit these high-risk and other seismically at-risk federal buildings—a cost some officials believed was too expensive to pursue.

However, local governments—particularly those in the high-risk cities of Seattle, San Francisco, Los Angeles, and Memphis—are working to protect people and property from earthquakes by conducting earthquake drills, requiring safer buildings, and retrofitting existing structures.

To learn more about when ShakeAlert may be ready to be fully implemented, how much earthquakes have cost U.S. cities, and to see examples of how to enhance new and existing buildings to better withstand quakes, check out our full report.