We’ve talked a lot about Medicare on this blog but Medicaid, a federal-state health care program, is also on our radar. In fact, it’s one of our High Risk issues. Today’s WatchBlog looks at the size and complexity of Medicaid, and some of the challenges to oversight and transparency that the program presents.

Medicaid is big. How big?

Medicaid provided health care coverage to more than 75 million people in 2015, making it the largest health insurance program (by enrollment) in the United States. Medicaid is also one of the largest drivers of the federal budget—it cost over $520 billion in 2015 alone.

Medicaid is complex.  How complex?

So, what about oversight?

Oversight of Medicaid matters, not only because the program needs to be effective for those enrolled, but also because it needs to be accountable to taxpayers.

For example, Medicaid’s size and complexity make it vulnerable to improper payments (e.g., payments that shouldn’t have been made or were made in the wrong amount). And it’s a big vulnerability, with an estimated $29.12 billion in improper payments made in 2015.

To help reduce improper payments, states (or the health plans they contract with) must screen to make sure that providers can participate in Medicaid. In particular, providers who have lost their billing privileges in Medicare or in any state’s Medicaid or Children’s Health Insurance Program are ineligible to participate.

But screening isn’t simple. We recently looked at how some states and plans screened providers and found that the information they used was split across 22 databases, which were managed by 15 different federal agencies.

Transparency is particularly important when it comes to how states fund their Medicaid programs. For example, supplemental payments (extra payments states can make to providers that aren’t necessarily linked to specific services) totaled at least $43 billion in 2011 (check out our podcast for more information on supplemental payments). But there is little clarity in this process—states don’t always report which providers they paid, and there isn’t a standard process to decide if these payments were economical or efficient. We’ve found that hospitals use revenues from these supplemental payments broadly, from covering the costs of uninsured patients to buying a helicopter.

There should also be more transparency about how states finance their share of Medicaid payments. States can seek funds from health care providers (e.g., through taxes) to help finance Medicaid. But, depending on how it’s done, complex financing arrangements can shift Medicaid costs to the federal government. 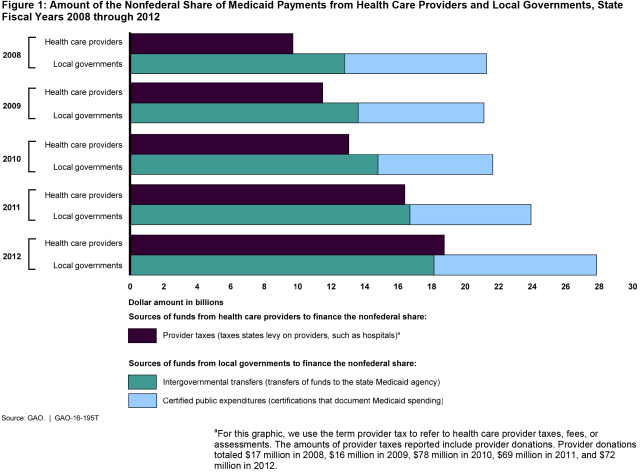 For more about Medicaid, how oversight can be improved, and key reports we’ve issued, check out our Medicaid Key Issues page, as well as our podcast on Medicaid’s key challenges.