GAO found, based on a questionnaire sent to state Medicaid agencies, that states financed 26 percent, or over $46 billion, of the nonfederal share of Medicaid expenditures with funds from health care providers and local governments in state fiscal year 2012. State funds were most of the remaining nonfederal share.

Nationally, states increasingly relied on funds from providers and local governments in recent years to finance the nonfederal share, based on GAO's analysis (see figure). In the three selected states this increase resulted in cost shifts to the federal government. While the total amount of funds from all sources, including state funds, increased during state fiscal years 2008 through 2012, funds from providers and local governments increased as a percentage of the nonfederal share, while state funds decreased. GAO's review of selected financing arrangements in California, Illinois, and New York illustrates how the use of funds from providers and local governments can shift costs to the federal government. For example, in Illinois, a $220 million payment increase for nursing facilities funded by a tax on nursing facilities resulted in an estimated $110 million increase in federal matching funds and no increase in state general funds, and a net payment increase to the facilities, after paying the taxes, of $105 million.

Amount of the Nonfederal Share of Medicaid Payments from Health Care Providers and Local Governments, State Fiscal Years 2008 through 2012 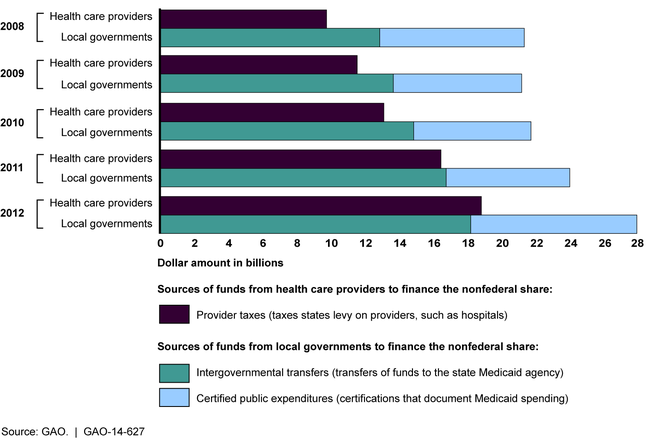 The Centers for Medicare & Medicaid Services (CMS)—the federal agency that oversees Medicaid—has not ensured the data on state Medicaid financing are accurate and complete, and while new initiatives to improve reporting have begun, data gaps remain. More reliable data to effectively monitor the program would allow CMS and others to identify net provider payments and assess the effects of the payments on providers, beneficiaries, and the federal government. GAO has found that as currently designed, two CMS initiatives to improve data collection have data gaps that will limit their effectiveness for CMS's oversight.

Medicaid, a jointly financed federal-state program, cost $432 billion in 2012. States use various sources of funds to finance the nonfederal share, such as state funds and funds from health care providers and local governments. Concerns have been raised about increased Medicaid payments that are financed with funds from providers receiving the Medicaid payments. Although such financing arrangements are allowed under certain conditions, they can also result in shifting costs to the federal government with limited benefits to providers and beneficiaries.

GAO was asked to review states' financing of the nonfederal share of Medicaid. GAO examined the extent to which (1) states have relied on funds from health care providers and local governments to finance the nonfederal share; (2) this reliance has changed in recent years, and any implications of changes; and (3) CMS collects data to oversee states' sources of funds. GAO administered a questionnaire to all state Medicaid agencies, examined effects of financing changes in a nongeneralizable sample of three states selected in part based on Medicaid spending and geographic diversity, and met with CMS officials.

GAO recommends that CMS take steps to ensure states report accurate and complete data on all sources of funds to finance the nonfederal share. CMS did not concur with GAO's recommendation but stated that it will examine efforts to improve data collection for oversight. As discussed in the report, GAO believes its recommendation is valid.