8 years ago this month, the Federal Reserve bailed out Bear Stearns, preventing it from collapsing. This triggered an unprecedented amount of federal assistance to help stabilize markets—more than $1 trillion in loans and hundreds of billions of dollars of capital and guarantees flowing to financial institutions.

These interventions reinforced the notion that some financial institutions are so large and interconnected that the federal government will always act to prevent their failure—in effect, they are “too big to fail.”

Ahead of the Minneapolis Federal Reserve’s “Ending Too Big to Fail” Symposium, today’s WatchBlog highlights our work examining large banks pre- and post-Dodd-Frank.

There is concern that big banks get preferential treatment because of the fear that their failure would disastrously affect the financial sector and the nation’s economy.

For example, if investors think a bank is “too big to fail,” they might assume there is little risk of default and be willing to lend it money at lower interest rates.

The behavior such preferential treatment could foster is a problem. If these large financial institutions are allowed to fund risky ventures without bearing any of the costs—like paying higher interest rates—then they may take on even more risk.

And if a big bank’s high risk loans and other investments don’t pay off, it may not be the bank or the investors who pay, but the American taxpayers.

Listen to Lawrance Evans, a director in our Financial Markets and Community Investment team, explain in a 2014 podcast:

Dodd-Frank and other regulations sought to address risk at “Too Big to Fail” entities by creating, among other things,

However, there is ongoing debate about how effective these reforms have been. To help inform the debate, we developed 42 econometric models examining funding costs for banks based on historical data and certain assumptions. 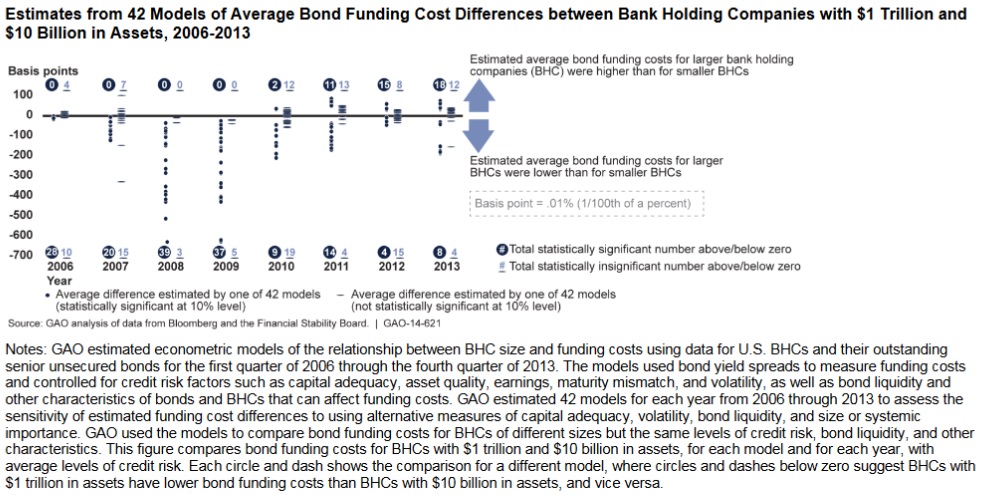 But we can’t say what drove the changes we found. For example, are the changes because large banks are now considered safer, or because the expectations about government bailouts have shifted? In fact, one analysis we ran raised the possibility that if the nation were back where it was 8 years ago—in the throes of a financial crisis—big banks would again see lower borrower rates relative to smaller banks. That is, it is possible they would reap the benefit of being too big to fail when it mattered most.

While there has been some progress, the largest banks have gotten larger since the onset of the financial crisis. Regulators need to finish the work they’ve started to better ensure that institutions can fail without putting taxpayers’ money on the line.