Each year, tens of thousands of unaccompanied children under 18 are apprehended by the Department of Homeland Security. These children have often traveled thousands of miles under dangerous conditions to reach the United States. But they arrive at the border with no lawful immigration status and no parent or legal guardian in the United States available to care for them. Today’s WatchBlog shares our recent look at “unaccompanied alien children” at our borders.

Most of these children were 16- or 17-year-old boys, but the demographics have been changing. From fiscal years 2009 to 2014, the proportion of unaccompanied children 15 years old or younger rose from 33 percent to 48 percent. The proportion of girls nearly doubled—rising from 18 percent to 30 percent, with an overall proportion of 22 percent during this time frame. 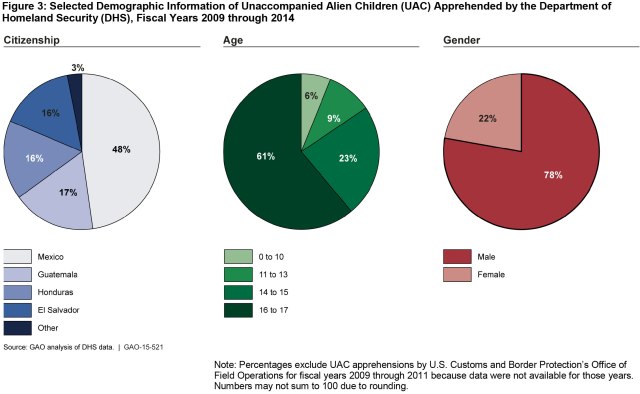 Caring for kids in custody

Unaccompanied children are typically kept in holding rooms like this one in Texas.

A toilet and sink are visible on the left at the back of the room; a jug for drinking water and a pile of blankets on the right. Homeland Security is responsible for temporarily caring for the children—by providing food, water, clean bedding, etc.—and for limiting the children’s time in its custody.

While we found that Homeland Security generally has policies to care for the children, it often couldn’t show us that it acted on these policies.

We recommended better record keeping, such as tracking the care provided to children and the length of time each child spends in custody.

Rebecca Gambler, a director in our Homeland Security and Justice team, explains more in our podcast:

Under federal law, Homeland Security’s Customs and Border Protection must generally transfer unaccompanied children to the Department of Health and Human Services to await immigration hearings.

However, for Mexican and Canadian children, there is an initial screening process to determine whether to let the child voluntarily return, or repatriate, to his or her home country.

Specifically, a child from Mexico or Canada may repatriate if U.S. Customs and Border Protection determines that he or she:

Unfortunately, we found that Customs and Border Protection wasn’t always consistent in their determinations about these 4 factors. For example, the interview form doesn’t provide guidance on how to determine whether a child can make an independent decision, and Border Patrol agents didn’t consistently document, as required, how they decided the child could make such decisions. We recommended clearer guidance on interpreting children's responses.

We also recommended, among other things, that Customs and Border Protection staff record why they decided that a child should or shouldn’t be returned to Mexico or Canada, so the agency can determine whether these decisions were appropriate.

The agency agreed with our recommendations and we will monitor what it does to implement them.