About a third of state tax collections come from sales taxes. After the Supreme Court's 2018 Wayfair decision, states could require e-commerce sellers to tax their residents even if the seller didn't have a physical presence there, like a store or a warehouse. We testified about the case's impacts. For example: 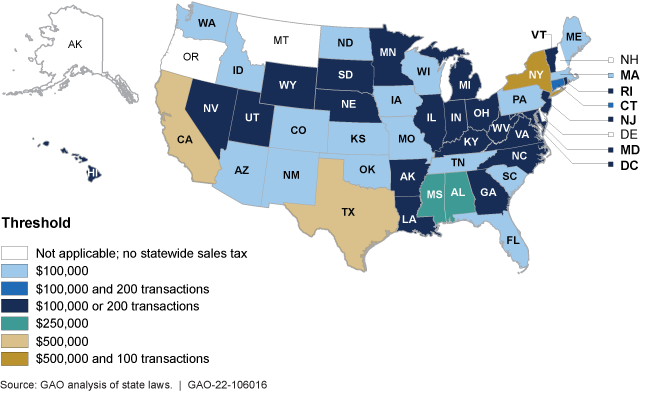 In its June 2018 decision, South Dakota v. Wayfair, the Supreme Court held that states could require out-of-state businesses (commonly referred to as remote sellers) to collect and remit sales taxes even in the absence of a physical presence, such as a store or warehouse in the state. Following Wayfair, states moved quickly to put in place new legal requirements for remote sellers, which often differed by state. As of June 2021, all 45 states with a statewide sales tax and the District of Columbia had adopted requirements governing sales tax collection by remote sellers based on an economic, as opposed to physical presence (such as a certain amount of sales into the state). All but one had also adopted requirements shifting primary tax collection obligations from sellers in an online marketplace to the company facilitating the sale, such as Amazon, eBay, and Etsy. These requirements vary in numerous respects, including effective dates, exemptions for small businesses below certain thresholds, and how those thresholds are calculated.

State revenue agencies responding to GAO's 2022 survey attributed some increases in sales tax revenue to remote sales following the Wayfair decision. For example, 33 states provided data on 2021 collections from remote sales, totaling around $23.1 billion. In addition, 20 states provided data on the portion attributable to marketplace sales, totaling around $9.5 billion (around 41 percent of total collections from remote sales reported that period).

Note: This table combines calendar and fiscal year formats provided by states. Some states provided data on marketplace collections only, which may undercount total collections. Marketplaces include companies such as Amazon, eBay, and Etsy which facilitate sales on behalf of third-party sellers.

In November 2017, GAO identified costs associated with multistate sales tax collection: software-related costs, audit and assessment costs, and costs associated with research and liability. GAO confirmed in its ongoing work that remote sellers incurred costs in these categories as they took steps to comply with new remote sales tax requirement s. Among other things, businesses incurred costs to establish software for expanded multistate tax collection and audit and assessment costs associated with increased exposure to more tax jurisdictions. Businesses also incurred costs to stay current with legal requirements in multiple jurisdictions but were still exposed to liability risks, including liability for past sales. For example, many states' remote sales tax requirements became effective within about 3 months of Wayfair. However, some businesses were unable to comply with these requirements until well after the effective dates, thereby exposing them to liability for sales made after those dates.

Sales tax is an important revenue source for the 45 states with a statewide sales tax, making up an average of about one-third of states' total tax collections. Over the past quarter century, electronic commerce (e-commerce) sales have grown rapidly. However, until recently states could not require e-commerce and other businesses operating out-of-state to collect taxes on sales to residents of their states unless the business had a physical presence in the state.

For the part of this statement based on ongoing work, GAO administered a survey to revenue agencies in all 45 states with a statewide sales tax and the District of Columbia. Forty-three states and the District of Columbia responded, for a response rate of 95 percent. GAO also interviewed multiple organizations representing states and businesses, as well as businesses engaged in e-commerce and multistate taxation, selected to represent a broad range of perspectives.