When consumers order goods remotely, such as from a website or mail-order catalog, states have limited ability to collect taxes on the sale. Under current law, a state cannot require a remote seller to charge sales taxes unless the seller has a substantial presence, such as a store or warehouse, in the state.

Congress has been considering legislation to expand states' authority to collect taxes from remote sellers. We found that state and local governments could gain billions of dollars in additional revenue if given this authority, but some businesses would likely see increased costs to comply with the tax laws of multiple states. 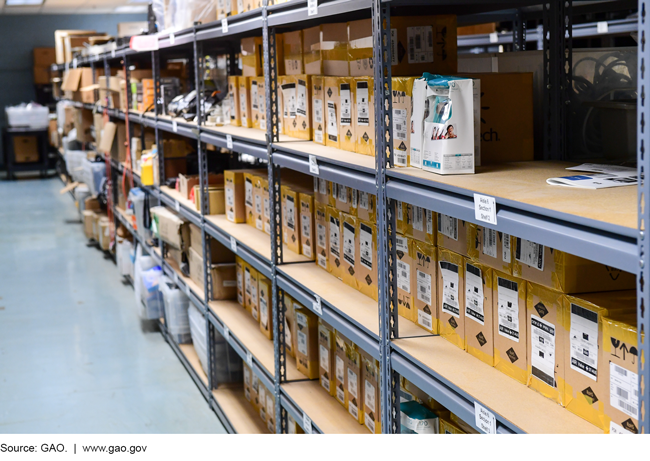 Photograph of boxed items on shelves in a mail facility.

Forty-five states and the District of Columbia levy taxes on the sale of goods and certain services, including those sold remotely, such as over the Internet. In 1992, the Supreme Court ruled in Quill v. North Dakota that a state can only require a business to collect and remit sales tax if the business has substantial presence, referred to as nexus, in that state. However, the decision stated that Congress could pass legislation to overrule this limitation. In general, under present law, if a seller does not have nexus in a state, and therefore does not collect tax, then a purchaser is required to pay a use tax in the same amount to his or her state government.

Note: Totals may not sum due to rounding. These estimates are the potential revenue state and local governments could gain in calendar year 2017 if granted the legal authority to require all remote sellers to collect taxes on all remote sales.

Some businesses would likely see increases in several types of costs if required to collect taxes on all remote sales. These costs would be higher for businesses not currently experienced in multistate tax collection. Officials from state revenue departments told us that they generally do not anticipate major administrative costs or challenges if given the authority to require businesses to collect tax on all remote sales.

Over the past two decades, e-commerce sales have grown rapidly, greatly expanding a category of sales known as remote sales. Under current law, states cannot require all businesses to collect taxes on remote sales. Congress has been considering proposals to change this. Little current, nationwide information exists to inform the debate.

GAO estimated 2017 revenue gains to state and local governments based on actual and estimated sales data for remote sellers, excluding certain sales that were exempt from taxation or already collected by remote sellers with a substantial presence in a state. Ranges for GAO's estimates were based on a number of key assumptions that were varied based on available data. To describe related costs and challenges to businesses and states, GAO interviewed officials from state revenue agencies, subject matter specialists, and a wide variety of retailers with remote sales and the organizations that represent them.

GAO provided a draft of this report to subject matter specialists who agreed with the general approach that GAO followed in making its estimates.