The Election Assistance Commission was established in 2002 to serve as an information clearinghouse on election administration, among other things. It administered $400 million in grants to help states conduct elections during the COVID-19 pandemic. It also provided information on in-person and absentee/mail voting, and more.

The EAC could report more clearly on how the grant money was spent. For example, we found issues with how states and the EAC categorized about 20% of the spending, making it hard to consistently determine how states spent funds. We recommended the EAC assess how it administered the grants to find ways to improve. 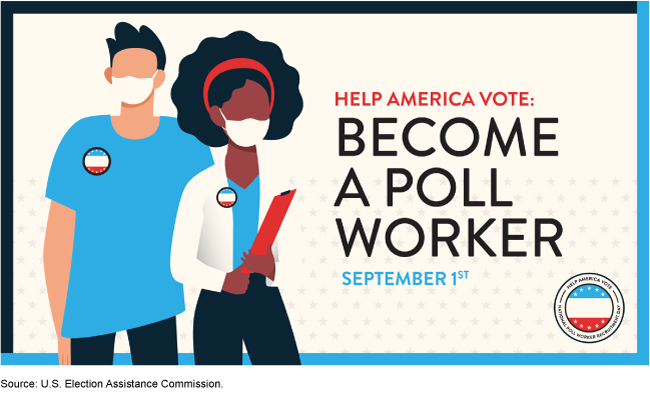 The U.S. Election Assistance Commission (EAC)—established to serve as a national clearinghouse of information on election administration, among other responsibilities—shared information on a range of topics to help state and local election officials conduct elections during the COVID-19 pandemic. For example, it shared information on in-person voting, absentee/mail voting, and contingency planning. It also established National Poll Worker Recruitment Day and developed graphics as part of a related public awareness campaign (see fig.).

The EAC identified and addressed some issues with its administration of CARES Act grants. For example, while administering CARES Act grants, the EAC revised required grant reporting forms to more clearly align with requirements and to address difficulties some states were having with narrative questions on the forms. The EAC and GAO identified other issues with administration of the grants. For example, GAO found issues with how states and the EAC categorized expenditures involving nearly 20 percent of the total reported spending nationwide. As a result, in the EAC's annual grant expenditure report to Congress, states' expenditures for similar or the same items or activities could be included under multiple categories, making it difficult to consistently determine, by category, how states spent the grant funds.

During the 2020 federal elections, the EAC administered $400 million in grant funds provided by the CARES Act to help states prepare for and respond to the COVID-19 pandemic.

The CARES Act included a provision for GAO to report on its ongoing monitoring and oversight efforts related to the COVID-19 pandemic. This report (1) describes information that the EAC provided to state and local election officials for conducting elections during the pandemic, (2) describes how the EAC administered CARES Act grant funding, and (3) examines the extent to which the EAC assessed its CARES Act grants administration. GAO reviewed information on the EAC's website on conducting elections during the pandemic and interviewed EAC officials regarding processes for developing and distributing this information. GAO obtained and reviewed the EAC's data on CARES Act grant expenditures, grant guidance for states on expending and reporting funding, and materials the EAC used to review state reports. GAO also interviewed EAC officials regarding grant administration procedures.