Civilians make up about 98% of the Army Corps of Engineers' 35,000 personnel. The jobs are highly specialized and it can be difficult for the Corps to recruit, develop, and retain employees.

The Corps has taken significant steps to address its workforce challenges. However, its strategic plan for dealing with these challenges is outdated and inconsistently used.

While the Corps has generally followed leading practices for workforce planning it needs more top management involvement to set the overall direction and goals. Our recommendation addresses this issue. (Government strategic human capital management is on our High Risk List.) 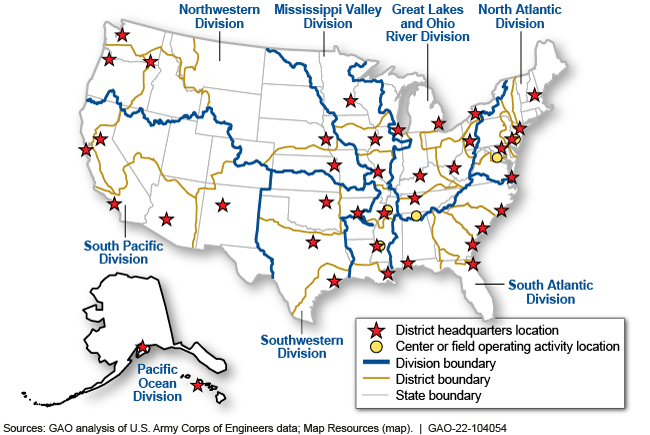 The U.S. Army Corps of Engineers (Corps) has a large civilian workforce that is highly specialized. The Corps faces workforce challenges, such as recruiting and retaining employees, due to competition from the private sector and other agencies. To address its civilian workforce challenges, the Corps implemented three successive strategic human capital plans during fiscal years 2010 through 2018. The most recent plan—developed in fiscal year 2017—addressed challenges in four stages: (1) planning, (2) recruiting, (3) developing, and (4) sustaining the workforce. For example, to address planning challenges, the Corps established an annual agency-wide assessment of workload-to-workforce capacity, competency, and balance. For fiscal year 2019, instead of developing a formal human capital plan, in late 2018, the Corps conducted an in-depth analysis of its workforce challenges that identified priority workforce initiatives and associated metrics for addressing these challenges.

Extent to Which the U.S. Army Corps of Engineers (Corps) Has Implemented Leading Practices for Strategic Workforce Planning

The Corps has generally implemented four of five leading practices of strategic workforce planning (see table). For example, the Corps generally implemented the leading practice of determining critical skills and competencies in part by conducting its annual agency-wide workforce assessment. However, the Corps only partially implemented the leading practice of involving top management in strategic workforce planning. Specifically, the Corps has not ensured that its top management set the overall direction and goals of workforce planning; top management has not updated the Corps' strategic human capital plan since fiscal year 2017. In May 2020, Corps officials told GAO that a draft updated plan was under review. However, as of October 2021, the plan had not yet been approved. By finalizing and distributing agency-wide an updated human capital plan, the Corps would be better positioned to address its capacity and preparedness challenges and manage its current and future workforce.

The Corps' civilian workforce accounts for about 98 percent of its 35,000 civilian and military employees. According to Corps documentation, workforce challenges affect the agency's ability to maintain the capacity to meet mission requirements and preparedness to meet current and future challenges. GAO has identified strategic human capital management as a government-wide high-risk area, including the need to improve talent management activities.

GAO recommends that the Department of Defense ensure that the Corps finalizes and distributes agency-wide a strategic human capital plan. The Department concurred with the recommendation.