The CARES Act included a foreclosure moratorium and provided mortgage borrowers with options to temporarily suspend payments during the COVID-19 pandemic. Millions of borrowers took advantage of these protections—particularly Black and Hispanic borrowers, as well as first-time and rural homebuyers. However, the moratorium ends on July 31, 2021.

To continue to help borrowers affected by the pandemic, federal housing agencies have taken additional steps to limit mortgage defaults and foreclosures. For instance, they have expanded repayment options and proposed new servicing rules to limit avoidable foreclosures through December 2021. 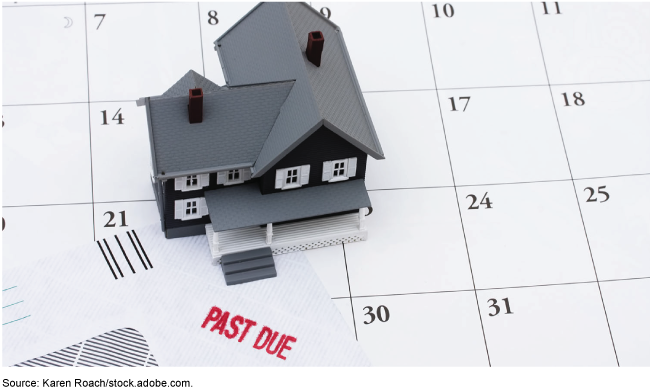 Many single-family mortgage borrowers who missed payments during the pandemic used the expanded mortgage forbearance provision in the CARES Act. This provision allowed borrowers with loans insured, guaranteed, made directly, purchased, or securitized by federal entities (about 75 percent of all mortgages) to temporarily suspend their monthly mortgage payments. Use of the forbearance provision peaked in May 2020 at about 7 percent of all single-family mortgages (about 3.4 million) and gradually declined to about 5 percent by February 2021, according to GAO's analysis of the National Mortgage Database. As of February 2021, about half of all borrowers who used forbearance during the pandemic remained in forbearance. In addition, Black and Hispanic borrowers, who were more likely to have been economically affected by the pandemic, used forbearance at about twice the rate of White borrowers. Forbearance was also more common among borrowers at a greater risk of mortgage default—specifically, first-time, minority, and low- and moderate-income homebuyers with mortgages insured by the Federal Housing Administration and rural homebuyers with loans guaranteed by the Rural Housing Service (see fig. 1).

A small percentage of borrowers who missed payments during the pandemic have not used forbearance—less than 1 percent of those covered by the CARES Act. Yet, borrowers who have not used forbearance may be at a greater risk of default and foreclosure, according to GAO's analysis of the National Mortgage Database. For example, these borrowers tended to have lower subprime credit scores, indicating an elevated risk of default, compared to borrowers who were current or in forbearance, who tended to have higher prime or near prime credit scores. Federal agencies and the government-sponsored enterprises Fannie Mae and Freddie Mac (the enterprises) have taken steps to make these borrowers aware of forbearance options, such as through direct phone calls and letters. In addition, the Consumer Financial Protection Bureau (CFPB) amended mortgage servicing rules in June 2021 to require servicers to discuss forbearance options with borrowers shortly after any delinquency.

Foreclosures declined significantly during the pandemic because of federal moratoriums that prohibited foreclosures. The number of mortgages entering foreclosure decreased by about 85 percent on a year-over-year basis from June 2019 to June 2020 and remained as low through February 2021, according to mortgage data provider Black Knight (see fig. 2).

Note: Foreclosure data were only available through February 2021 at the time of our review. The number of new foreclosures includes vacant and abandoned properties and non-federally backed loans, which the CARES Act did not cover.

Federal entities have taken additional steps to limit pandemic-related mortgage defaults and foreclosures. Federal housing agencies and the enterprises have expanded forbearance options to provide borrowers with additional time to enter and remain in forbearance. In addition, they streamlined and introduced new loss mitigation options to help borrowers reinstate their loans after forbearance, including options to defer missed payments until the end of a mortgage. Borrowers in extended forbearances generally have large expected repayments—an average of $8,300 as of February 2021, according to the National Mortgage Database. As a result, delinquent borrowers exiting forbearance have most commonly deferred repayment, according to the Mortgage Bankers Association. Further, CFPB's amended mortgage servicing rules allow servicers to streamline processing of loss mitigation actions and establish procedural safeguards to help limit avoidable foreclosures until January 1, 2022.

The risk of a spike in defaults and foreclosures is further mitigated by the relatively strong equity position of borrowers due to rapid home price appreciation. Home equity—or the difference between a home's current value and any outstanding loan balances—can help borrowers with ongoing hardships avoid foreclosure by allowing them to refinance their mortgage or sell their home to pay off the remaining balance. According to GAO's analysis of the National Mortgage Database, few borrowers (about 2 percent) who were in forbearance or delinquent in February 2021 did not have home equity after accounting for home price appreciation. By comparison, during the peak of foreclosures in 2011 after the 2007–2009 financial crisis, about 17 percent of all borrowers and 44 percent of delinquent borrowers had no home equity (see fig. 3).

Figure 3: Estimated Percentage of Single-Family Mortgage Borrowers without Home Equity as of 2020 and 2011, by Loan Type and Status

Millions of mortgage borrowers continue to experience financial challenges and potential housing instability during the COVID-19 pandemic. To address these concerns, Congress, federal agencies, and the enterprises provided borrowers with options to temporarily suspend their mortgage payments and placed a moratorium on foreclosures. Both provisions begin to expire in the coming months.

GAO analyzed data on mortgage performance and the characteristics of borrowers who used forbearance from January 2020 to February 2021 using the National Mortgage Database (a federally managed, generalizable sample of single-family mortgages). GAO also reviewed data from Black Knight and the Mortgage Bankers Association on foreclosures and forbearance repayment. In addition, GAO interviewed representatives of federal entities about efforts to communicate with borrowers and limit default and foreclosure risks. To highlight potential risks, GAO also analyzed current trends in home equity among delinquent borrowers relative to the 2007–2009 financial crisis.