All Bureau of Indian Education-funded schools closed their buildings in March 2020 in response to COVID-19, affecting over 41,000 students at 183 schools.

We testified that the Bureau did not offer comprehensive guidance on distance learning. In August 2020, it issued a guide focused on in-person instruction. But most schools provided distance learning in school year 2020-21.

The Bureau and others ordered laptops for students in September. However, by late December, schools had not distributed 80% of them.

We recommended the Bureau provide schools with guidance and take steps to collect timely information on schools' IT needs. 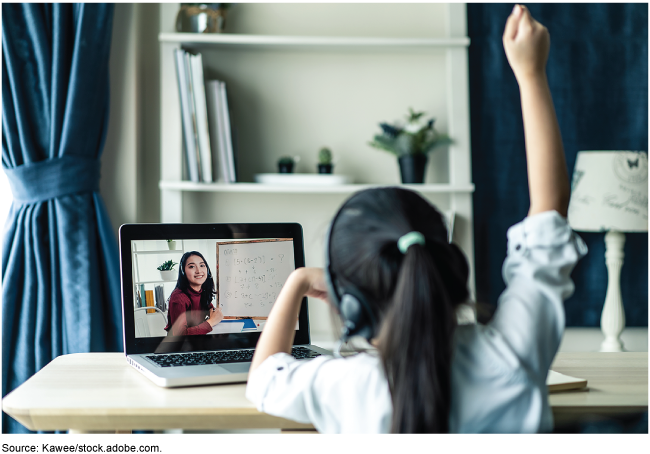 The Bureau of Indian Education (BIE), within the Department of the Interior (Interior), has not provided BIE-funded schools with comprehensive guidance on distance learning during the COVID-19 pandemic. In March 2020, BIE issued a short memo directing schools to “deliver flexible instruction” and “teach content,” but did not offer specific guidance on how to do so. In July 2020, 13 of the 25 schools that responded to GAO's survey said they wanted BIE to provide information on developing and implementing distance learning programs. In addition, 12 schools responded that they wanted information on distance learning methods for areas without broadband internet access. In August 2020, after some schools had already begun the school year, BIE issued a re-opening guide for the 2020-2021 school year. BIE's guidance focused primarily on preparations for in-person instruction at schools, although nearly all schools provided distance learning during the fall of 2020. The guidance contained little information on distance learning. Providing schools with comprehensive distance learning guidance will help them better navigate the current pandemic as well as potential future emergencies that lead to school building closures.

BIE helped improve internet access for students at BIE-operated schools during the pandemic, but many students had not received laptops to access online learning by the end of fall 2020. BIE and other Interior offices provided over 7,000 hotspots to students to improve home internet access, but they did not order laptops for most students until September 2020. Interior officials said a nationwide IT supply shortage contributed to the delayed order for about 10,000 laptops. GAO found, however, that delays were also caused in part by BIE not having complete and accurate information on schools' IT needs. Most schools received laptops from late October 2020 to early January 2021, although some laptops still had not been delivered as of late March 2021. Once laptops were delivered, however, schools also faced challenges configuring them, leading to further delays in distributing them to students. BIE officials told GAO that to address schools' challenges with configuring laptops, they are assessing schools' IT workforce needs. Most BIE students did not receive laptops until months after the school year began, according to GAO's analysis of Interior information. Specifically,

Without accurate, complete, and up-to-date information on schools' IT needs, BIE was unable to ensure that students received laptops when they needed them. Establishing policies and procedures for assessing schools' IT needs would help guide the agency's IT purchases now and in the future, and position schools to integrate technology into their everyday curricula.

BIE's mission is to provide quality education to approximately 41,000 students at 183 schools it funds on or near Indian reservations in 23 states. About two-thirds of these schools are operated by tribes and the remaining third are operated by BIE. In March 2020, all BIE schools closed their buildings in response to the COVID-19 pandemic. GAO reviewed distance learning at BIE schools as part of its oversight responsibilities under the CARES Act.

This testimony examines the extent to which (1) BIE has provided schools with guidance to develop and implement distance learning programs during the COVID-19 pandemic, and (2) students have had the technology they need to participate in such programs. GAO analyzed the guidance BIE provided to schools on distance learning, examined BIE's provision of technology to schools and students, surveyed a non-generalizable sample of 30 schools—including 19 operated by tribes and 11 operated by BIE— with 25 schools responding, selected for geographic diversity and level of community broadband access, among other criteria, reviewed relevant federal statutes, regulations, and agency documentation, and interviewed BIE and school officials.

GAO is making two recommendations to BIE to (1) provide comprehensive guidance to schools on distance learning; and (2) establish policies and procedures to ensure it has complete, accurate, and up-to-date information on schools' technology needs.