The CARES Act lets agencies reimburse contractors for paid leave provided to their employees who can't access work sites during the pandemic (and whose duties cannot be performed remotely).

We recommended that the Office of Management and Budget (which coordinates government-wide contracting policy) collect and share lessons learned about reimbursing contractors to help inform future federal response to emergencies. 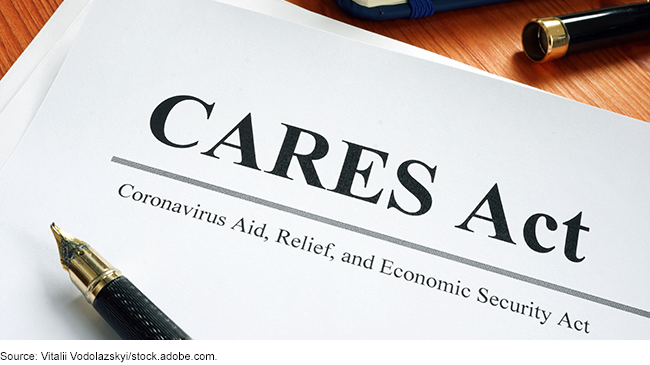 To help government contractors keep their workforce in a ready state during the COVID-19 pandemic, section 3610 of the CARES Act generally authorized government agencies to reimburse contractors for paid leave provided to contractor personnel and subcontractors during the national emergency. Section 3610 did not appropriate specific funding for this purpose. The four agencies GAO reviewed—the Departments of Defense, Energy, and Homeland Security, and NASA—reported use of section 3610 authority totaling at least $882.8 million over 14 months. The extent to which the agencies used the authority varied, from $1.4 million at Homeland Security to $760.7 million at Energy.

Further, Defense officials estimated that defense contractors have more than $4 billion in paid leave costs that are potentially eligible for reimbursement under section 3610. Defense officials also noted, however, that the department does not plan to reimburse this full amount using existing funding. Agencies also based their reimbursement decisions on the nature of the work performed by contractors, such as whether telework was an option.

Twelve out of the 15 contractors GAO interviewed reported that paid leave reimbursement had a great or moderate effect on their ability to retain employees (see figure), in particular those with specialized skills or clearances.

Given the urgency of the pandemic, agencies prioritized quick implementation of section 3610 over a more deliberative process, resulting in variations such as how agencies tracked use of the authority. Officials from all four agencies said that they either have captured or intend to capture lessons learned from implementing section 3610 and are willing to share these with other federal agencies. However, the Office of Management and Budget (OMB)—which coordinates government-wide contracting policy—has not collected and shared lessons learned. With coordination from OMB's Office of Federal Procurement Policy, the government could seize an opportunity to enhance implementation of paid leave reimbursement provisions that may be enacted as part of rapid federal responses to future emergencies.

In March 2020, Congress passed the CARES Act, which provides over $2 trillion in emergency assistance for those affected by COVID-19.

Section 3610 of the CARES Act enables agencies, at their discretion, to reimburse contractors for paid leave provided to their employees and subcontractors who are unable to access work sites due to facility closures or other restrictions, and whose duties cannot be performed remotely during the pandemic. The CARES Act also includes a provision for GAO to review federal contracting pursuant to authorities provided in the Act.

In September 2020, GAO found that agencies had not made much use of section 3610 authority as of July 2020, and expectations of future use varied.

This report (1) examines how selected federal agencies have used section 3610 authority and (2) presents selected contractors' perspectives on COVID-19 paid leave reimbursement. GAO reviewed guidance and data and interviewed cognizant officials from four agencies with contract obligations greater than $10 billion in fiscal year 2019. GAO also selected a non-generalizable sample of 15 contractors that received or requested section 3610 reimbursements from one or more of the selected agencies and conducted semi-structured interviews of contractor representatives.