In the U.S., several business models exist for providing chassis, and each model has benefits and drawbacks. For example, one business model groups chassis from multiple companies into a single pool, which can be used by any carrier to move any container, saving time at ports. But chassis in these pools may be older and may not have features like radial tires or LED lights. 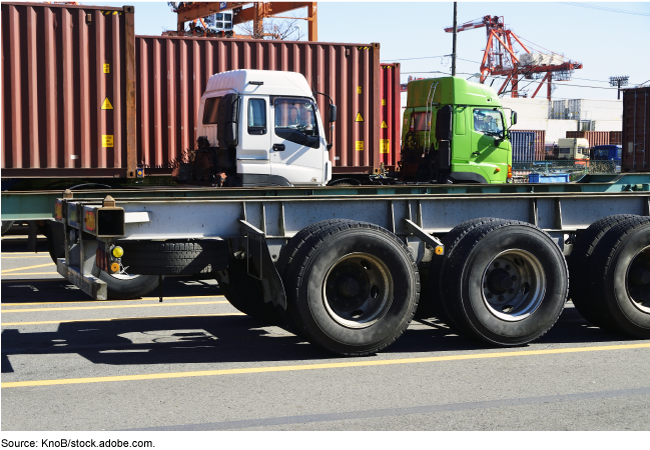 Four distinct models are used in the U.S. to make chassis available to motor carriers (see table), each with benefits and drawbacks according to the entities GAO interviewed. While chassis are generally provided to motor carriers using one of these four models, more than one model may be available at a port.

Entities GAO interviewed identified multiple benefits and drawbacks to each of the chassis provisioning models. Regarding benefits, for example, both the single chassis provider model and the motor carrier-controlled model allow IEPs and motor carriers to have direct control over the maintenance and repair of their chassis, something these entities potentially lose under other chassis provisioning models. Further, the gray pool and the pool-of-pools models can resolve many of the logistical concerns regarding the availability of chassis, leading to operational efficiencies for port operators and the ability of motor carriers to choose whatever chassis they wish. Regarding drawbacks, cost considerations were identified in some cases. For example, under the single chassis provider model, two IEPs told us that while an expected part of the business, repositioning chassis to ensure there is a sufficient supply of chassis where they are needed can be costly to the IEPs.

The federal government provides oversight of chassis safety but has a limited economic oversight role regarding chassis. The Federal Motor Carrier Safety Administration (FMCSA) employs several inspection methods to help oversee chassis safety and compliance with regulations. For example, inspectors perform roadside inspections on commercial vehicles, including chassis, in operation. FMCSA also performs investigations of individual IEPs to oversee chassis safety. While one stakeholder GAO spoke with stated that FMCSA should consider maintaining safety ratings for IEPs—as is currently done for motor carriers—FMCSA officials told us that the current processes provide sufficient information to select IEPs for investigation. The Federal Maritime Commission (FMC) oversees ocean carriers that provide service to and from the U.S. and works to ensure a competitive and reliable ocean transportation supply system. Entities may file complaints with FMC to allege violations of the Shipping Act of 1984, as amended. One such complaint was filed in August 2020, in which the complainants allege, among other things, that although ocean carriers do not own chassis, they still control the operation of chassis pools at ports. An initial decision on this complaint is expected in August 2021. None of the entities GAO spoke with identified additional actions they would like for FMC to take regarding chassis.

Senate Report 116-109—incorporated by reference into the explanatory statement accompanying the Further Consolidated Appropriations Act, 2020—contained a provision for GAO to study intermodal chassis. Within the U.S., some entities have expressed concerns about chassis, including limited availability of chassis in some circumstances, as well as the age and safety of chassis. This report describes selected stakeholders' views on: (1) the ways in which chassis are made available for the movement of shipping containers and the benefits and drawbacks of those models, and (2) the federal government's role in the chassis market.

To address these objectives, GAO reviewed relevant reports on chassis provisioning and federal oversight. GAO interviewed representatives from FMC, FMCSA, five industry associations, and the three largest intermodal equipment providers. GAO also interviewed three ocean carriers, five port operators, and a motor carrier selected, in part, for their large number of container movements. The information obtained from these interviews provides a broad perspective of relevant issues but is not generalizable to all entities.