The Department of Defense continues cleanup efforts of munitions and hazardous substances at former military sites in Vieques and Culebra, Puerto Rico. But substantial work remains. DOD estimates cleanup efforts will continue through FY 2032. The costs of prior work combined with DOD's reported estimates for planned cleanup on both islands and the surrounding waters totals nearly $800 million.

DOD faces several challenges with cleanup, such as the islands' rugged topography, logistics, and safety concerns with handling unexploded munitions. DOD is using a variety of technologies, some innovative, to clean up the land and underwater sites.

A remotely-operated excavator sifts sand at a cleanup site on Vieques, Puerto Rico 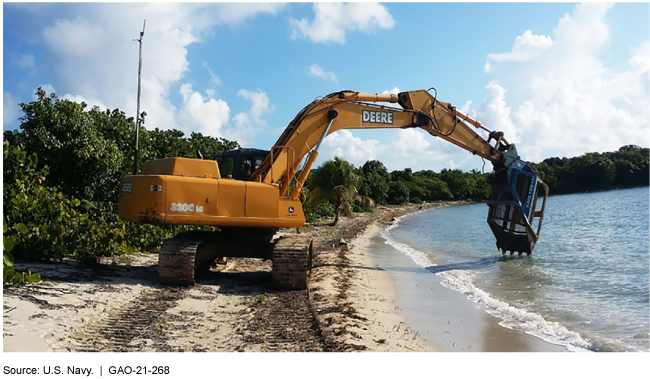 The Department of Defense (DOD) continues to make progress on cleanup efforts at the former military sites in Vieques and Culebra, Puerto Rico, but substantial work remains. The U.S. Navy and the U.S. Army Corps of Engineers (Corps) estimate that cleanup efforts will continue through fiscal year 2032. The Navy has completed cleanup on nearly all sites contaminated with hazardous materials on Vieques, but substantial work remains for the Navy and the Corps on both islands at sites with munitions, especially underwater sites where unexploded munitions are buried in the sea floor. The costs of prior cleanup, combined with DOD's reported estimates for planned cleanup on both islands, through fiscal year 2032, total nearly $800 million.

DOD faces a number of challenges in its cleanup efforts, according to agency documentation and interviews with Navy, Corps, and other federal officials. Challenges include logistics, the islands' topography and environment, and the safety concerns around handling unexploded munitions. The Navy also faces challenges on Vieques with community distrust of the military handling cleanup efforts. DOD is taking steps to address these challenges, including establishing procedures and protocols, and mechanisms for community input. For example, to address environmental challenges, the agencies established a standard operating procedure to protect endangered and threatened species and their habitats.

Example of Two Technologies Used to Detect Unexploded Munitions on Land and Underwater as Part of Cleanup Efforts on Vieques and Culebra, Puerto Rico

For several decades, DOD used the islands of Vieques and Culebra, Puerto Rico, for training sites that left extensive amounts of munitions, hazardous substances, and other contaminants on the islands and in their surrounding waters. DOD began cleanup efforts on Culebra in the early 1990s and on Vieques in the mid- 2000s. Both efforts are conducted pursuant to the Comprehensive Environmental Response, Compensation, and Liability Act of 1980, as amended. On Vieques, the U.S. Navy funds and leads the cleanup efforts, and the Environmental Protection Agency (EPA) has oversight responsibilities. On Culebra, the Corps funds and leads the cleanup efforts, and the Commonwealth of Puerto Rico has oversight responsibilities.

The conference report accompanying the National Defense Authorization Act for Fiscal Year 2020 (H.R. Rep. No. 116-333) contained a provision for GAO to study the status of the federal cleanup on Vieques and Culebra. This review (1) discusses the status and cost of cleanup efforts, (2) identifies challenges to the cleanup efforts and examines how DOD is addressing them, and (3) describes the cleanup technologies DOD is using at these sites and how federal agencies assess the feasibility of innovative technologies. GAO reviewed agency data, documentation, and guidance; and interviewed DOD, EPA, and other federal officials, Commonwealth officials, academic researchers, and residents of both islands.