Littoral Combat Ships were designed for smaller crews, which means they rely on contractors for maintenance more than ships with larger crews. This strategy—meant to cut costs—has posed challenges. For example, the Navy pays for U.S. contractors to travel overseas to perform maintenance.

We also found significant unplanned work in maintenance contracts we reviewed—often because the Navy didn't understand ship condition before planning repairs. One effect of unplanned maintenance is schedule delays that limit fleet readiness.

The Navy is beginning to take steps to address the effects of unplanned maintenance and to determine its cause. 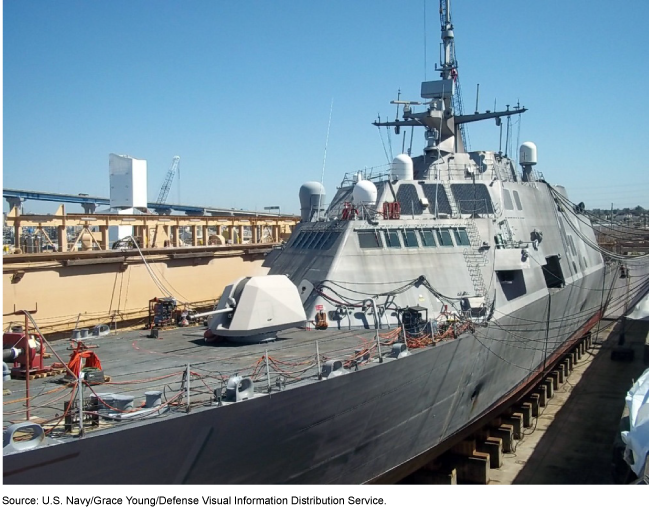 The Littoral Combat Ship (LCS) is a class of small surface ships with two unique design variants. Both LCS variants carry smaller crews and rely more on contractors for maintenance than any other Navy ship. While this strategy was intended to reduce operating costs, it contributes to challenges in the Navy's strategy for contracted maintenance. Specifically:

Heavy reliance on original equipment manufacturers. LCS includes numerous commercial-based systems that are not used on other Navy ships. However, the Navy lacks sufficient manufacturer technical data to maintain many of these systems. This can lead to longer maintenance periods due to extra coordination needed for the manufacturers to assist with or complete the work.

Although the Navy is establishing teams of its personnel to take on routine maintenance, contractors will continue performing some of this work.

The Navy is beginning to implement contracting approaches for LCS maintenance in order to help mitigate schedule risk, while taking steps to avoid it in the future. GAO found in the 18 LCS maintenance delivery orders it reviewed that the Navy had to contract for more repair work than originally planned, increasing the risk to completing LCS maintenance on schedule. A majority of this unplanned work occurred because the Navy did not fully understand the ship's condition before starting maintenance. The Navy has begun taking steps to systematically collect and analyze maintenance data to determine the causes of unplanned work, which could help it more accurately plan for maintenance. The Navy has also recently begun applying some contracting approaches to more quickly incorporate unplanned work and mitigate the schedule risk, such as (1) setting a price for low-dollar value unplanned work to save negotiation time and (2) procuring some materials directly instead of waiting for contractors to do so. Such measures will be important to control cost and schedule risks as additional LCS enter the fleet in the coming years.

The Navy plans to spend approximately $61 billion to operate and maintain LCS, a class of small surface ships equipped with interchangeable sensors and weapons. With limited operations to date, these ships have entered the Navy's maintenance cycle. Since 2005, GAO has reported extensively on LCS issues, including ships delivered late and with increased costs and less capability than planned. The Navy also encountered problems as LCS entered the fleet, including higher than expected costs for contractor maintenance and numerous mechanical failures. In 2020, GAO reported that major maintenance on other surface ships using the same contracting approach as LCS was 64 days late, on average. The Navy acknowledges the importance of reducing maintenance delays in order to improve the readiness of its surface fleet.

A House Report included a provision for GAO to review long-term contracting strategies and challenges for LCS repair and maintenance. This report (1) describes the effect of the LCS program's acquisition and sustainment strategies on its contracted maintenance and (2) assesses the extent to which the Navy is using contracting approaches to address any cost and schedule risks in maintaining LCS. To conduct this assessment, GAO reviewed relevant Navy documentation, including a sample of 18 delivery orders for LCS maintenance from fiscal year 2018 through April 2020 selected to cover each availability type and each LCS variant. GAO also interviewed Navy officials and contractor representatives.