In addition to their role in education, public schools serve as voting locations, emergency shelters, and more. But can people with disabilities access all public school buildings?

Our national survey found two-thirds of school districts had facilities with physical barriers that may limit access. For example, steep ramps at school entrances can make it hard for people with disabilities to get in.

The Departments of Justice and Education can work together to help school districts understand the Americans with Disabilities Act and provide technical help tailored to public school buildings. Justice should take the lead in providing information.

This main entrance is not accessible and lacked signs directing people to an accessible entrance. 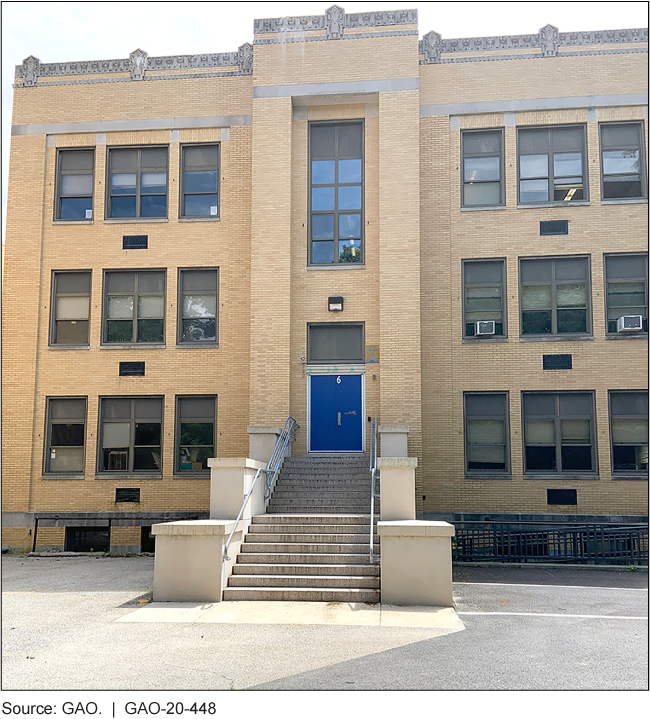 Two-thirds of U.S. public school districts have schools with physical barriers that may limit access for people with disabilities, according to GAO's survey of district officials. Barriers, such as a lack of accessible door hardware and steep ramps, can make it challenging for students, teachers, and others with disabilities to use public school facilities (see fig.). In 55 schools across six states, the most common areas with barriers GAO observed were restrooms, interior doorways, and classrooms. GAO also observed barriers related to safety and security. For example, for security, some schools had installed double-door vestibules with limited maneuvering space that could trap people who use wheelchairs.

Examples of Doorway and Auditorium Barriers GAO Observed in Schools

Note: Barriers presented in this figure potentially limit physical access for people with disabilities, but taken alone, would not necessarily establish whether a legal violation has occurred.

An estimated 70 percent of districts had large-scale renovations, small-scale upgrades, or accessibility evaluations planned in the next 3 calendar years, but frequently cited funding constraints as a challenge to these efforts. Districts also identified the need to prioritize projects that keep buildings operational, such as roofing and heating projects. In addition, GAO's survey, observations during site visits, and interviews with national disability groups revealed a tension between making safety and security upgrades and improving physical accessibility.

The Department of Justice (Justice) has not provided technical assistance on physical accessibility in schools, and GAO's surveys indicate such help is needed. Justice has authority to provide information on interpreting the Americans with Disabilities Act of 1990 (ADA), including for public schools, and it has provided technical assistance regarding other public facilities, such as stadiums. In addition, Justice, along with the Department of Education (Education) and other federal agencies, recently launched a new website on school safety, but it does not include specific information on how to improve accessibility of public school facilities or provide information on ADA requirements in the context of school safety upgrades. Without such information, federal agencies may miss opportunities to help ensure that people with disabilities have safe and secure access to public school facilities.

It’s the 30th Anniversary of the ADA. What’s Changed?

July 26th marked 30 years since the passage of the Americans with Disabilities Act of 1990. The...
Blog Post

For Disability Pride Month—We Highlight Our Work on Access Issues