For our 18th annual assessment of DOD’s weapon programs, we looked at DOD’s plans to acquire about $1.8 trillion worth of new weapons systems.

DOD is focused on delivering these weapons quickly, and in some cases has started using a more streamlined process to do so. However, for many of the programs we looked at, DOD did not take steps to help achieve its goal, such as completing certain planning and testing steps before making decisions.

Also, DOD leaders may not have complete information about programs using the streamlined process, which could make it hard for them to know if the programs can deliver new systems as quickly as promised. 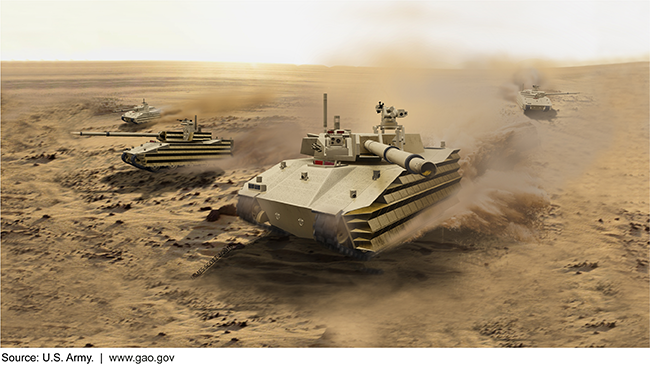 Tanks in a field

This report (1) summarizes the characteristics of 121 weapon and IT programs, (2) examines cost and schedule measures and other topics for these same programs, and (3) summarizes selected organizational and legislative changes. GAO identified the 121 programs for review based on their cost and acquisition status. GAO selected organizational and legislative changes that it determined related to the execution and oversight of the 121 programs.

GAO reviewed relevant legislation and DOD reports, collected data from program offices through a questionnaire, and interviewed DOD officials.
Additional analyses and assessments of major IT programs are included in a companion report to be issued later this year.

The Department of Defense (DOD) currently plans to invest over $1.8 trillion to acquire new major weapon systems such as aircraft, ships, and satellites. At the same time, the department is investing billions more in information technology (IT) systems and capabilities that it expects to either prototype or field rapidly through a new middle-tier acquisition pathway. (See table.)

In recent years, Congress enacted reforms that could help streamline acquisition oversight and deliver capabilities faster. In January 2020, in part to improve the speed of the acquisition system, DOD reissued its foundational acquisition guidance. The new guidance includes six acquisition pathways based on the characteristics and risk profile of the system being acquired, including three that relate to the three types of programs GAO reviewed: 1) major capability acquisition, used to acquire major defense acquisition programs (MDAP); 2) middle-tier acquisition (MTA), used for rapid prototyping and rapid fielding efforts; and 3) defense business systems, used to acquire certain major IT programs. GAO’s observations on MDAPs and MTA programs are discussed below.

MDAPs are generally programs designated by the Secretary of Defense as such or that are estimated to require eventual total expenditure for research, development, test, and evaluation of more than $480 million, or for procurement of more than $2.79 billion, in fiscal year 2014 constant dollars.

MDAPs have generally stabilized non-quantity-related cost growth and schedule growth but continue to proceed with limited knowledge and inconsistent software development approaches and cybersecurity practices. Between 2018 and 2019, total acquisition cost estimates for DOD’s 85 current MDAPs grew by a combined $64 billion (a 4 percent increase), growth that was driven by decisions to increase planned quantities of some weapon systems. For example, DOD more than doubled in the past year the total number of missiles it plans to acquire through the Air Force’s Joint Air-to-Surface Standoff Missile program. Also between 2018 and 2019, capability delivery schedules for MDAPs increased, on average, by just over 1 month (a 1 percent increase). However, MDAPs’ cost and schedule performance is less encouraging as measured against their original approved program baselines. MDAPs have accumulated over $628 billion (or 54 percent) in total cost growth since program start, most of which is unrelated to the increase in quantities purchased. Additionally, over the same time period, time required to deliver initial capabilities has increased by 30 percent, resulting in an average delay of more than 2 years.

Many MDAPs continue to move forward without the benefit of knowledge at key acquisition points. GAO has found a correlation between implementation of certain practices and improved cost and schedule performance (see table).

Statute required DOD to establish guidance for rapid prototyping and rapid fielding pathways. These pathways are to provide a streamlined acquisition process for programs intended to field capabilities within 2 to 5 years. MTA programs are generally exempt from DOD’s traditional acquisition and requirements development processes.

DOD has taken steps to improve oversight of its costliest MTA programs, but challenges remain to tracking cost and schedule performance. The 13 programs GAO reviewed were expected to last about 4 years on average, although most planned follow-on efforts. For example, the Army’s Extended Range Cannon Artillery program plans two rapid prototyping spirals, followed by fielding. DOD issued guidance in December 2019 that increased oversight for MTA programs, including requiring certain business case documentation to help assess whether programs are well-positioned to field capabilities within 5 years. These document requirements were consistent with a June 2019 GAO recommendation. GAO found that while most MTA programs it reviewed were lacking some or all of these documents at program initiation, they had made significant progress in receiving approval of these documents by the time of this review (see figure).

GAO observed inconsistent cost reporting and wide variation in schedule metrics across MTA programs, which pose oversight challenges for Office of the Secretary of Defense and military department leaders trying to assess performance of these programs. According to DOD officials, the department is in the process of improving MTA program data.