After 2 hurricanes devastated Puerto Rico in 2017, FEMA identified about 10,000 damaged sites including schools, hospitals, and roads needing funds to repair or rebuild.

FEMA and Puerto Rico manage a Public Assistance Program that provides federal funds to state and local governments and some nonprofits to help in recovery efforts.

FEMA has issued recovery policy and guidance that are specific to Puerto Rico’s evolving conditions. But for many recovery partners, figuring out which guidance to follow and accessing it can be difficult. FEMA could also take steps to improve its cost estimation guidance. We recommended FEMA address these issues. 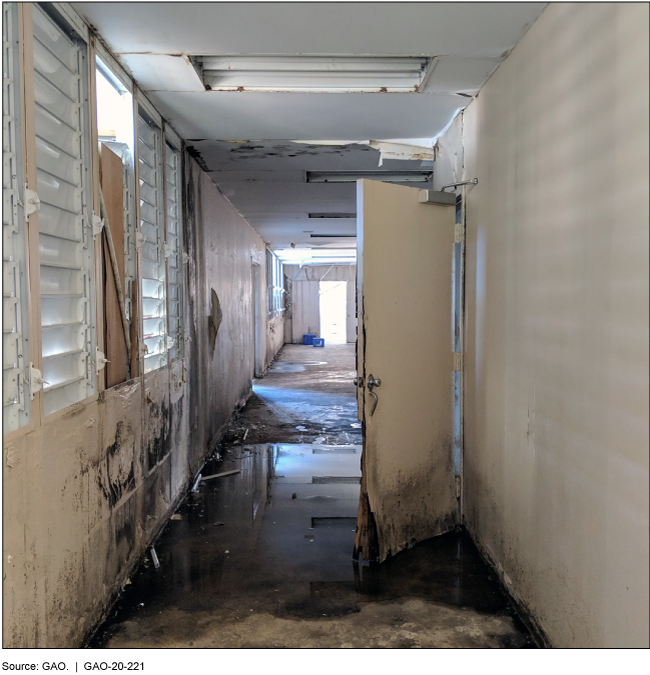 FEMA has adapted its Public Assistance cost estimating guidance to accurately reflect costs in Puerto Rico but could improve the guidance to further enhance its reliability. GAO found that FEMA's guidance substantially or fully met best practices for nine of 12 steps included in the GAO Cost Estimating and Assessment Guide , such as documenting and defining the purpose of the estimate. However, FEMA could improve the guidance in three areas, including analyzing risks and future uncertainties that could affect these estimates.

Hurricane Damage to a School in Puerto Rico, March 2019

FEMA has developed Public Assistance policies and guidance to respond to complex recovery conditions in Puerto Rico. However, Puerto Rico government officials GAO spoke with stated that they were not always certain about how to proceed in accordance with FEMA policy because they did not consistently understand what guidance was in effect. Further, FEMA does not maintain a repository of Public Assistance guidance available to all recovery partners that includes current applicable guidance. Without real time access to current applicable guidance, recovery partners risk using guidance that has been revised or replaced.

In September 2017, two major hurricanes—Irma and Maria—struck Puerto Rico, destroying roads and buildings among other things. Puerto Rico estimates that $132 billion will be needed to repair and reconstruct infrastructure and services through 2028. FEMA is the lead federal agency responsible for assisting Puerto Rico to recover from these disasters. FEMA administers the Public Assistance program in partnership with Puerto Rico to provide funds to rebuild damaged infrastructure and restore services. GAO was asked to review federal recovery efforts in Puerto Rico.

In this report, GAO examines, among other things, (1) the status of FEMA Public Assistance program funding and any challenges in implementing the program, (2) the extent to which Public Assistance cost estimating guidance addresses conditions in Puerto Rico and aligns with best practices, and (3) the extent to which FEMA has developed policies and guidance for the program and any challenges with these policies and guidance. GAO reviewed FEMA's cost estimation guidance as well as documentation and data on the Public Assistance program through September 2019. GAO conducted site visits to Puerto Rico and interviewed FEMA and Puerto Rico government officials regarding the status of recovery efforts.

GAO recommends that FEMA (1) revise its cost estimating guidance for Public Assistance to more fully adhere to best practices and, (2) develop a repository of current applicable Public Assistance guidance available to all relevant recovery partners in Puerto Rico. The Department of Homeland Security concurred with these recommendations.