We looked at how DHS tests and evaluates technologies to ensure they work before deploying them. The agency has strengthened its policies, guidance, and training to encourage testing and evaluation earlier in the acquisition process.

We recommended that DHS assess whether it has enough workers with the right skills to adequately oversee test and evaluation activities.

DHS tests and evaluates new technologies like facial recognition software to verify the identities of travelers leaving the country. 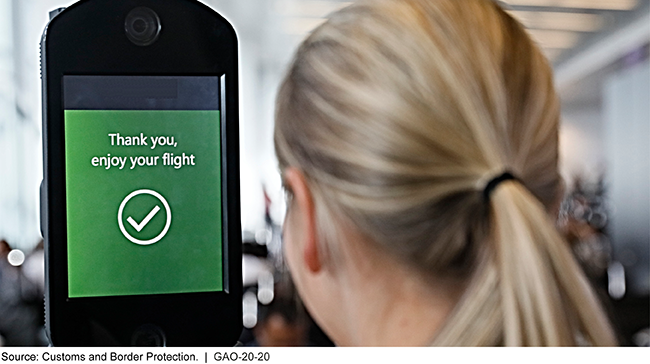 Woman looking into a facial recognition screen at an airport

Since August 2010, the Department of Homeland Security’s (DHS) Office of Test and Evaluation (OTE) has assessed major acquisition programs’ test results and DHS leadership has used OTE’s assessments to make informed acquisition decisions. Programs generally received approval to progress through the acquisition life cycle, but DHS placed conditions on its approvals in more than half the cases GAO reviewed.

Since May 2017, OTE has updated its policies and released new guidance that met nearly all of the key test and evaluation (T&E) practices GAO identified as contributing to successful acquisition outcomes. For example, OTE’s policy directs program managers to designate a T&E manager who is required to be certified to the highest level in the T&E career field—level III. This met the key practice that programs establish an appropriately trained test team. However, OTE’s guidance partially met the key practice to demonstrate that subsystems work together prior to finalizing a system’s design. Specifically, the guidance instructs programs to conduct integration testing, but not until after the design is finalized. GAO’s past work has shown that changes after finalizing design can increase costs or delay schedules.

DHS faces challenges with its T&E workforce to effectively provide oversight. As shown in the figure, GAO determined that most programs do not have a level III certified T&E manager.

OTE also compiles data to monitor programs and the status of T&E managers, but GAO found that OTE’s data were unreliable. Specifically, OTE had inaccurate data for about half of the programs reviewed. Establishing a process for collecting and maintaining reliable data can improve OTE’s ability to accurately track programs’ T&E managers. Further, DHS has expanded OTE’s responsibilities for T&E oversight in recent years. However, OTE officials said executing these responsibilities has been difficult because DHS has not authorized changes to its federal workforce since 2014. These officials added that they have had to prioritize their oversight efforts to programs actively engaged in testing and, as such, are unable to assist programs that are early in the acquisition life cycle. By assessing OTE’s workforce, DHS can take steps to ascertain the extent to which OTE has the number of staff with the necessary skills to fulfill the full scope of its oversight responsibilities.

DHS invests several billion dollars in major acquisition programs each year to support its many missions. Conducting T&E of program capabilities is a critical aspect of DHS’s acquisition process to ensure systems work as intended before being delivered to end users, such as Border Patrol agents.

GAO was asked to review DHS’s T&E activities for major acquisition programs. This report examines, among other objectives, the extent to which DHS has (1) assessed programs’ test results and used this information to make acquisition decisions; (2) policies and guidance that reflect key T&E practices; and (3) a workforce to effectively oversee programs’ T&E activities.

GAO reviewed OTE’s assessments of program test results and acquisition decision memorandums. GAO assessed DHS’s policies and guidance against key T&E practices developed by GAO for the purpose of this report. GAO also reviewed data on the T&E workforce that provides oversight at the program and headquarters levels, as well as met with OTE and other relevant DHS officials.

GAO is making five recommendations, including that DHS revise its guidance to fully meet GAO’s key T&E practice to demonstrate that subsystems work together prior to finalizing a system’s design; establish a process for collecting and maintaining reliable data on programs’ T&E managers; and assess OTE’s workforce. DHS concurred with GAO’s recommendations.