Forty-two railroads, including Amtrak, commuter, and freight railroads, are required to implement positive train control (PTC)—a communications-based system designed to slow or stop a train that is not being operated safely. The deadline for PTC implementation was December 31, 2018, but railroads that meet certain criteria were able to ask for a maximum 2-year extension. 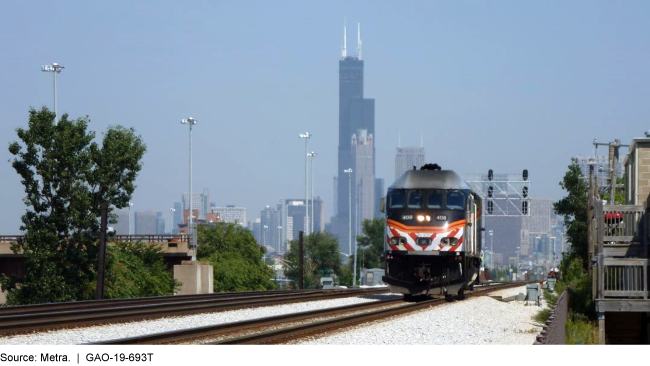 A train approaching a station with tall buildings in the background

Railroads' Reported Progress in Implementing PTC as of March 31, 2019

Full implementation with interoperability is achieved when the PTC system on the locomotive of a “tenant” railroad and the PTC system of a “host” railroad whose track is being used can successfully communicate, allowing uninterrupted movements over property boundaries. As of March 31, 2019, 11 of the 31 host railroads that must have interoperable PTC systems reported that they had achieved interoperability with at least 1 of their tenant railroads. Collectively, 38 of the 227 unique host-tenant relationships that require interoperability have been completed (17 percent), according to the Federal Railroad Administration (FRA). Most railroads reported to GAO that vendor and software issues were currently major or moderate challenges for PTC implementation. Over half of railroads also reported that interoperability was a major or moderate challenge, and can be complicated by software issues and coordinating host and tenant schedules, among other issues. For example, one railroad said that certain software functionality still had to be developed, tested, and implemented to address reliability issues and facilitate interoperability.

FRA continues to provide assistance and support to railroads on PTC interoperabilty and the testing process, but workload challenges for the agency persist. FRA will continue to face a substantial workload through 2020 as it oversees railroads' PTC implementation and reviews documents, including lengthy safety plans required for railroads to obtain PTC system certification. While FRA officials have described supporting interoperability and testing as areas of focus, they have not demonstrated how, within these broad areas, they are monitoring risk and prioritizing resources, as GAO recommended in March 2018. GAO continues to see value in FRA developing a risk-based approach to allocate its resources to oversee PTC.

Forty-two railroads are currently subject to the statutory mandate to implement PTC, a communications-based system designed to automatically slow or stop a train that is not being operated safely. Railroads were required to implement PTC by December 31, 2018, but would receive extensions up to December 31, 2020, if specific statutory requirements were met.

In March 2018, GAO recommended FRA take steps to systematically communicate information to railroads and to use a risk-based approach to prioritize agency resources and workload. FRA concurred with these recommendations. FRA has taken actions to systematically communicate information to railroads. GAO will continue to monitor FRA actions with regard to allocating agency resources to oversee PTC.