We reviewed the federal response and recovery efforts. The Federal Emergency Management Agency:

FEMA's recovery efforts have included providing funding for the construction of temporary school facilities such as this cafeteria in St. Croix, U.S. Virgin Islands. 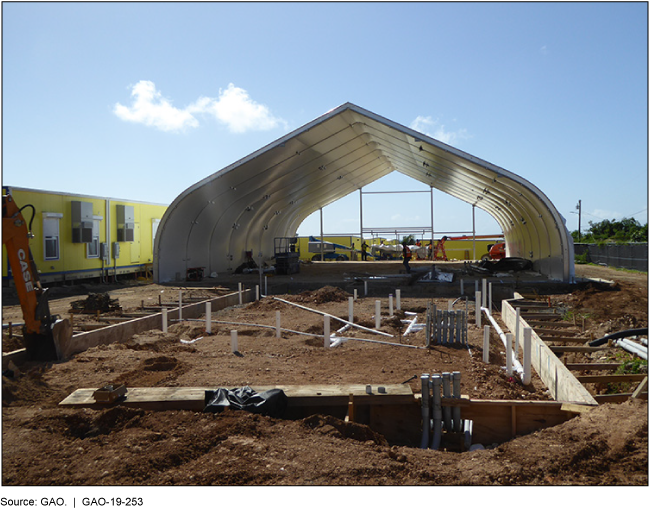 Shell of a structure under construction.

The Federal Emergency Management Agency (FEMA) obligated more than $1.4 billion in grant funding for Public Assistance projects in the U.S. Virgin Islands (USVI) as of October 1, 2018, in response to the 2017 hurricanes. FEMA obligated about $873.8 million for emergency work—debris removal activities and emergency measures to lessen the immediate threat to life, public health, and safety—and about $516.3 million for permanent work—including the repair or replacement of public infrastructure such as roads, electrical utilities, and schools. For example, FEMA obligated about $101 million for the purchase and installation of modular units to be used as temporary classrooms and other facilities while permanent school buildings are repaired or replaced. FEMA's obligations for permanent work also included funding for hazard mitigation measures to reduce the risk of damage during future storms—for example, by replacing wooden utility poles with composite fiberglass poles (see figure).

Examples of Public Assistance Projects in the U.S. Virgin Islands

In September 2017, two major hurricanes—Irma and Maria—struck the USVI, causing billions of dollars in damage to its infrastructure, housing, and economy. FEMA—a component of the Department of Homeland Security—is the lead federal agency responsible for assisting the USVI as it recovers from these natural disasters. Among other responsibilities, FEMA administers the Public Assistance program in partnership with the USVI territorial government, providing the USVI grant funding for response and recovery activities, including debris removal efforts, life-saving emergency protective measures, and the repair, replacement, or restoration of public infrastructure.

GAO was asked to review the federal government's response and recovery efforts related to the 2017 hurricanes. This report describes (1) the status of FEMA's Public Assistance program funding provided to the USVI in response to the 2017 hurricanes as of October 1, 2018, and (2) the USVI's transition to implementing the Public Assistance alternative procedures in the territory. GAO reviewed program documents and data on obligations and expenditures as of October 1, 2018, and interviewed officials from FEMA and the USVI regarding the Public Assistance program specifically and disaster recovery efforts more generally. GAO also conducted site visits to the USVI islands of St. Croix, St. Thomas, and St. John.

GAO is not making any recommendations in this report, but will continue to monitor the progress of the USVI's recovery as part of its ongoing work.