Fannie Mae and Freddie Mac issue mortgage-backed securities, which let lenders use investor cash for mortgage loans. When people default on the mortgages backing these securities—as many did in the 2007–2009 financial crisis—these issuers can take a hit.

So, in 2008, the federal government took control of Fannie Mae and Freddie Mac—leaving taxpayers on the hook for any potential losses.

This led to several housing finance reform proposals. Of the 14 proposals we reviewed, some lacked clear goals or didn't consider other federal players in the housing finance market—which we think Congress should consider including. 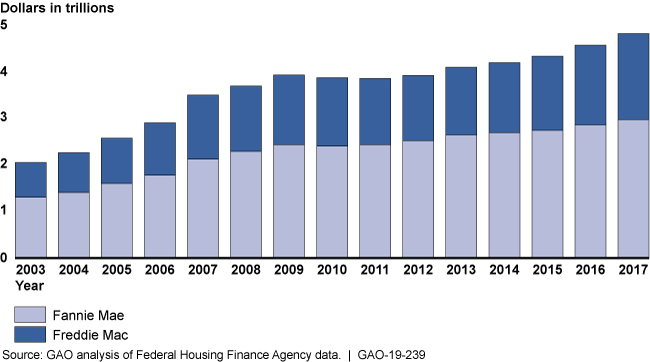 A stacked bar chart showing the value of Fannie Mae and Freddie Mac's mortgage-backed securities each year from 2003 through 2017.

Federal support of the housing finance market remains significant even though the market has largely recovered since the 2007–2009 financial crisis. While down from the peak in 2009, in 2017, the federal government directly or indirectly guaranteed about 70 percent of single-family mortgage originations.

In 2017, federal programs, such as those offered by the Federal Housing Administration (FHA), insured about 25 percent of mortgage originations.

Together, the enterprises and the Government National Mortgage Association (Ginnie Mae)—a federally owned corporation that guarantees MBS backed by federally insured mortgages—have issued or guaranteed 95 percent or more of all MBS issued annually since 2008 (see figure).

However, recent market trends pose risks to these entities and the housing finance system. For example, mortgage lending standards have loosened slightly in recent years, which could increase the risk of borrower default—especially in a recession or downturn in the housing market—and losses to federal entities. Nonbanks have increased their presence in mortgage lending and servicing, which involves collecting monthly mortgage payments, among other duties. For instance, the share of nonbank originations of FHA-insured mortgages increased from 56 percent in fiscal year 2010 to 86 percent in 2017. The share of nonbank servicers of mortgages in enterprise MBS also grew from 25 percent in 2014 to 38 percent as of the third quarter of 2018. While nonbank lenders and servicers have helped provide access to mortgage credit, they are not subject to federal safety and soundness regulations.

The Federal Housing Finance Agency (FHFA) has taken actions to lessen some of Fannie Mae and Freddie Mac's risk exposure. For example, under FHFA's direction, the enterprises have reduced the size of their riskier retained mortgage portfolios which hold assets that expose them to considerable interest rate and other risks from a combined $1.6 trillion in 2008 to $484 billion in 2017. Since 2013, the enterprises also have transferred increasing amounts of risk on their guaranteed MBS to private investors and insurers through credit risk transfer programs. However, federal fiscal exposure remains significant. The Department of the Treasury's remaining funding commitment through the senior preferred stock purchase agreements—which provide financial support to the enterprises—leaves taxpayers exposed to risk, especially in the event of adverse market or other conditions and given the recent growth in the enterprises' guarantee business. The value of outstanding MBS on which the enterprises guarantee principal and interest payments to investors grew from about $2.1 trillion in 2003 to about $4.8 trillion in 2017. The long duration of the conservatorships also raises uncertainty among market participants. Several experts and stakeholders GAO interviewed said that they have hesitated to make longer-term strategic plans and goals due to potential housing finance reforms that could markedly affect their industries. The figure below shows 2003–2017 trends in the enterprises' guarantee business and retained mortgage portfolios. 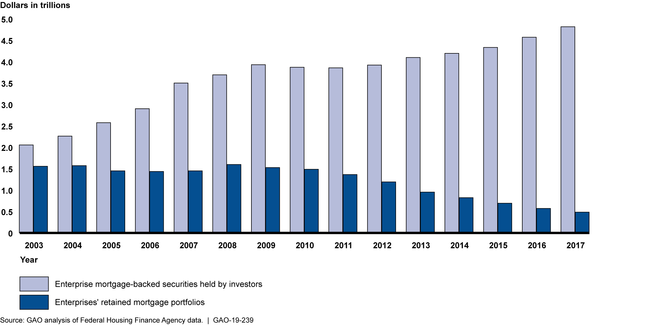 Note: Dollar amounts represent unpaid principal balance at year-end. The enterprises hold some of their mortgage-backed securities in their own and each other's retained mortgage portfolios.

GAO reviewed 14 housing finance reform proposals from Congress, agencies, industry groups, and think tanks. The proposals generally fit into four different models: reconstituted enterprises, a multiple guarantor system with an explicit federal guarantee, a government corporation, and a completely privatized market without an explicit federal guarantee. The 14 proposals generally meet key elements of GAO's framework for assessing potential changes to the housing finance system, such as addressing fiscal exposure, protecting investors, and considering the implications of the transition to a new system. However, many proposals lack clearly defined and prioritized goals or do not address the role of other federal entities in the housing finance system, such as FHA and Ginnie Mae—two key elements in GAO's framework. By incorporating these elements, policymakers could facilitate a more focused and comprehensive transition to a new housing finance system and provide greater certainty to market participants.

Since 2008, the federal government has greatly increased its role in financially supporting housing markets. In September 2008, FHFA placed Fannie Mae and Freddie Mac under conservatorship, which created an explicit fiscal exposure for the federal government. As of October 2018, the dollar amounts of their outstanding MBS have grown by more than $800 billion since the end of 2008.

Since 2013, GAO has designated the federal role in housing finance as a high-risk area. GAO examines (1) recent housing market developments, (2) risks and challenges posed by the current federal role, including ongoing conservatorship, and (3) housing finance reform proposals and their strengths and limitations.

Congress should consider legislation for the future federal role in housing finance that addresses the structure of the enterprises, establishes clear and prioritized goals, and considers all relevant federal entities, such as FHA and Ginnie Mae.