Housing finance is a complex, multi-trillion-dollar industry that played a major role in the 2007-2009 financial crisis. Two of our recent reports analyzed changes in the market since the crisis and their effect on taxpayers. We discuss our findings in today’s WatchBlog.

The process of pooling mortgages

After lenders make mortgage loans to homebuyers, they often sell the loans to third parties who pool these loans into mortgage-backed securities. Investors can then buy and trade these securities, similar to stocks and corporate bonds.

This process is intended to provide lenders with funding to make more loans and offer lower interest rates to borrowers.

The main federal entities involved in housing finance include:

Even though the market has largely recovered, the federal role in the housing market has increased. Fannie Mae, Freddie Mac, and Ginnie Mae issue or guarantee about 95% of new mortgage-backed securities, compared to about 50% in 2006. 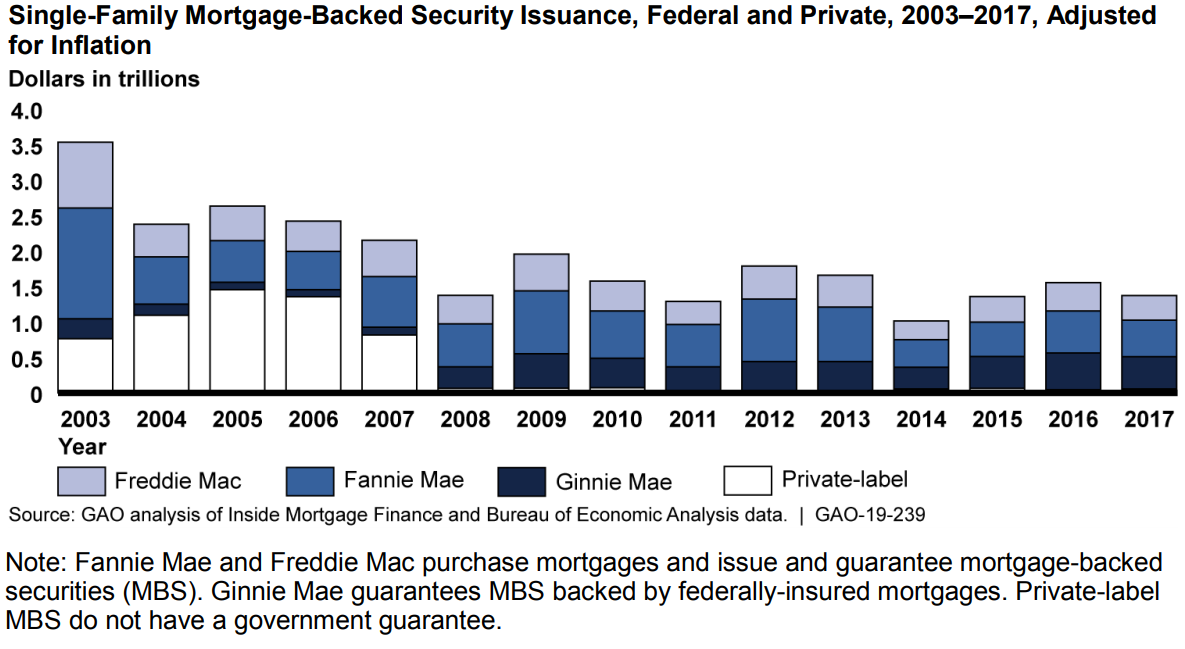 Notably, Ginnie Mae’s market share has grown dramatically. In 2007, it guaranteed $500 billion of mortgage-backed securities, and in 2018, it guaranteed $2 trillion—exposing it and taxpayers to a greater risk of loss. Our recent report found that Ginnie Mae faces resource and risk management challenges:

The need for housing finance reform

Congress and others have suggested different ways to reform the system to lessen the government’s role and address weaknesses. We reviewed 14 reform proposals and found that while they generally included certain key elements—such as addressing fiscal exposure—many proposals didn’t have clear goals or a system-wide focus. For instance, 7 proposals didn’t consider how reform might impact other federal entities, including Ginnie Mae.

We suggested that Congress consider legislation for the future federal role in housing finance that has clear goals and considers Ginnie Mae.

We also continue to include housing finance on our high-risk list.