Ginnie Mae, a government-owned corporation, is a major player in the housing finance market. It has grown to guarantee over $2 trillion worth of mortgage-backed securities—which encourages investors to provide capital for mortgage loans with a promise that they'll receive payments even if the borrowers default.

Ginnie Mae's growth has raised concerns. We examined how it manages risks; its staffing issues such as heavy reliance on contractors and limited budget for in-house staff; and how its oversight differs from other entities with similar functions.

Our recommendations help address these concerns and improve oversight of Ginnie Mae.

The unpaid principal on the mortgages backing Ginnie Mae's securities, which is a measure of Ginnie Mae's potential fiscal risk 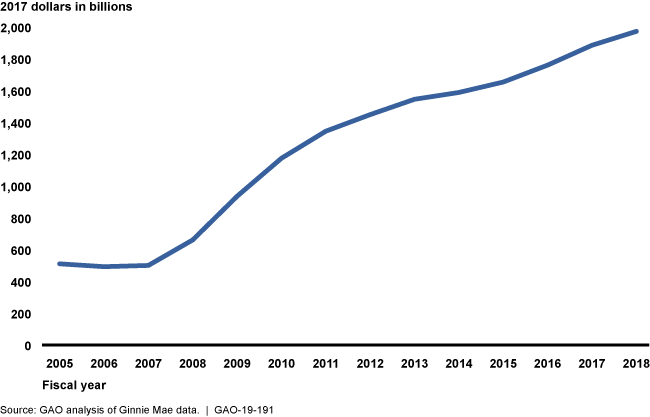 The amount of mortgage-backed securities (MBS) that the Government National Mortgage Association (Ginnie Mae) guaranteed rose from $500 billion to $2 trillion in fiscal years 2007–2018—exposing it to a greater risk of loss. From 2011 to 2018, the majority of institutions issuing Ginnie Mae-guaranteed MBS (issuers) shifted from banks to nonbanks, such as mortgage lenders. Unlike banks, nonbank issuers generally are not consistently subject to comprehensive federal safety and soundness standards.

Since GAO's 2011 report, Ginnie Mae increased minimum financial requirements for MBS issuers and developed new tools to monitor them. However, it has limited flexibility under law to raise the fee charged to guarantee single-family MBS in response to changes in risks. Ginnie Mae also has not assessed if the current fee would provide it with sufficient capital reserves to withstand losses under various scenarios, which would be consistent with federal internal control and risk-management standards. Such an analysis would provide Ginnie Mae with information necessary to help ensure the fee is set appropriately and inform Congress whether Ginnie Mae needs greater flexibility to adjust the fee.

As GAO reported in 2011, Ginnie Mae still faces contracting and staffing challenges. It continues to rely heavily on contractors (because it has authority to use certain fee revenue to fund contractors but not its own in-house staff). However, it has not routinely analyzed if using its own in-house staff instead of contractors for certain functions would be more efficient. Such analyses could help inform Ginnie Mae and Congress about the optimal mix of contractors and staff and potential need for greater budget flexibility. Ginnie Mae also still faces challenges recruiting and retaining staff, in part due to its lower pay scale relative to some of its competitors. But it has not exhausted all options under its current authority to revise its pay scale to mitigate these challenges or evaluated the costs and benefits of other options. Such actions could help inform Ginnie Mae about how it could use current authorities to address these challenges and provide Congress with the information needed to consider providing Ginnie Mae with additional pay flexibility.

The Department of Housing and Urban Development (HUD) oversees and sets general policies that govern Ginnie Mae's operations. However, GAO previously reported that HUD's management challenges limit the effectiveness of its oversight of Ginne Mae and its other programs. In light of these challenges and Ginnie Mae's increasing risks, GAO reviewed the oversight structures of three similar financial entities and found that certain alternative structures used by these entities, such as boards of directors, offer potential oversight benefits that could be considered as part of any future reform proposals for Ginnie Mae. As GAO previously reported, if Congress considers legislation to reform the federal role in housing finance, such reforms would need to be comprehensive and consider all relevant federal entities, including Ginnie Mae. As part of such reforms, it also would be important to ensure that Ginnie Mae is adequately overseen and its risks effectively managed.

GAO makes four recommendations to Ginnie Mae, including that it evaluate its issuer guaranty fee, contractor use, and alternative compensation structures. GAO also makes recommendations to Congress to consider requiring Ginnie Mae to report on its evaluations of (1) the adequacy of its issuer guaranty fee, (2) its reliance on contractors and use of certain fee revenue to hire in-house staff, and (3) use of greater flexibility to set staff compensation; and (4) to consider possible reforms to Ginnie Mae's oversight structure. Ginnie Mae concurred with GAO's recommendations.