Under some circumstances, a severe solar storm or high-altitude nuclear blast could damage the U.S. electric grid and potentially cause extensive outages.

Government and industry experts generally knew more about solar than nuclear risks, and agreed on a need for more research. All but 2 of the 13 electricity suppliers we contacted had assessed their systems' vulnerability to solar storms and most expected impacts to be relatively small.

A Coronal Mass Ejection Can Result in a Solar Storm 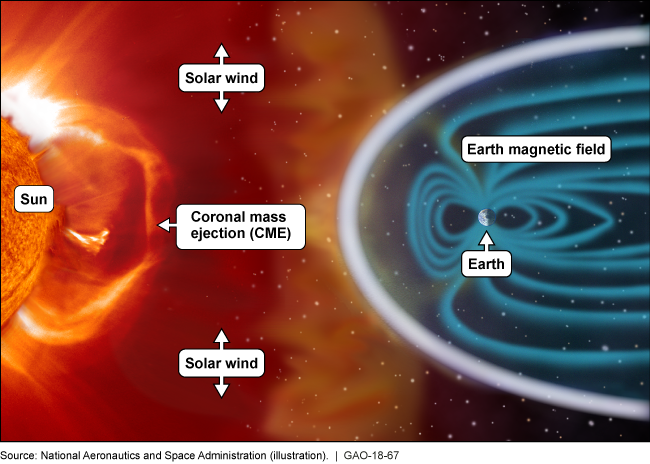 This is an illustration of a coronal mass ejection from the Sun reaching the Earth.

U.S. and Canadian electricity suppliers—electricity generation and transmission owners and operators—have identified information on the potential effects of a severe geomagnetic disturbance (GMD), resulting from a solar storm, but have identified less information about the potential effects of a high-altitude electromagnetic pulse (HEMP), resulting from the detonation of a nuclear device, on the electric grid. There is general agreement that more research is needed on both GMD and HEMP. Government and industry have publicly reported on the potential impacts of GMD on the grid. For example, one study identified two main risks: (1) potential voltage instability, causing power system collapse and blackouts; and (2) possible damage to key system components. However, these studies do not address the unique aspects of individual suppliers' networks. Recognizing this, 11 of the 13 selected suppliers GAO contacted said they had assessed their network vulnerability; of these 11, 6 expected GMD effects to be relatively small. In contrast, Department of Energy (DOE) and industry officials told GAO that information on HEMP effects is limited in that suppliers lack key information to fully understand HEMP effects on their networks. Historically, study of HEMP effects focused on impacts to military equipment rather than the commercial electric grid. Recently, DOE and industry began research to better understand HEMP effects. Of the 11 suppliers who responded to GAO about their HEMP efforts, 3 reported having studied the impact of HEMP on their networks and 2 of the 11 had integrated, or planned to integrate, HEMP-resistant features into new control centers.

Of the 13 selected suppliers GAO contacted, 10 reported making technological and operational improvements to enhance overall network reliability that also provided some protection against GMD and HEMP risks. For example, suppliers reported making technological improvements such as replacement of some older transformers and unprotected control centers. As of May 2017, all 13 suppliers stated they had complied with a GMD regulatory standard issued by the North American Electric Reliability Corporation (NERC)—the federally designated regulatory authority responsible for developing and enforcing reliability standards–-to develop operating procedures to mitigate GMD effects. A second regulatory standard—which is to be implemented in phases through 2022—will generally require suppliers to further assess their vulnerability to GMD.

Selected U.S. suppliers told GAO that costs they have incurred to protect against GMD and HEMP have been relatively small so far and they expect to recover those costs through customer rates. Suppliers could face future increased costs depending on corrective actions needed to comply with the second GMD regulatory standard. Federal and state regulators indicated that regulated U.S. suppliers' costs for protecting against GMD are generally recoverable through customer rates, but recovery is less certain for protection against HEMP because less is known about HEMP risks. Further, some suppliers could face challenges to cost recovery. Specifically, independent owners of power plants—those that sell power in wholesale electricity markets and are not part of an integrated utility—must recover reliability improvement costs through their sales of electricity and are not assured of cost recovery; federal regulators told GAO they are aware this could be a challenge for these independent owners.

A severe GMD or HEMP event could potentially have significant impacts— including power outages—on the nation's electric grid, which could affect other sectors that depend on electricity, such as communications. In response, NERC created two regulatory standards requiring certain U.S. and Canadian suppliers to assess their vulnerability to GMD and take appropriate steps in response.

GAO examined government and industry studies and interviewed federal and industry officials about potential GMD and HEMP effects on grid infrastructure; reviewed regulatory standards, monitoring processes, and NERC compliance audit data from April 2015 through August 2017; reviewed federal regulations and interviewed state regulators on cost recovery issues; and interviewed officials from a nongeneralizable sample of 13 U.S. and Canada electricity suppliers, selected based on factors such as GMD experience and preparation for GMD and HEMP events.

GAO provided a draft of this report to five federal agencies and NERC. Technical comments provided were incorporated as appropriate.