Facilities that handle hazardous chemicals could be targets for terrorists—e.g., these chemicals could be stolen and used to build explosive devices. The Department of Homeland Security inspects such facilities to ensure they comply with security standards. DHS also shares information about these facilities with local officials so that first responders are prepared for potential security incidents. 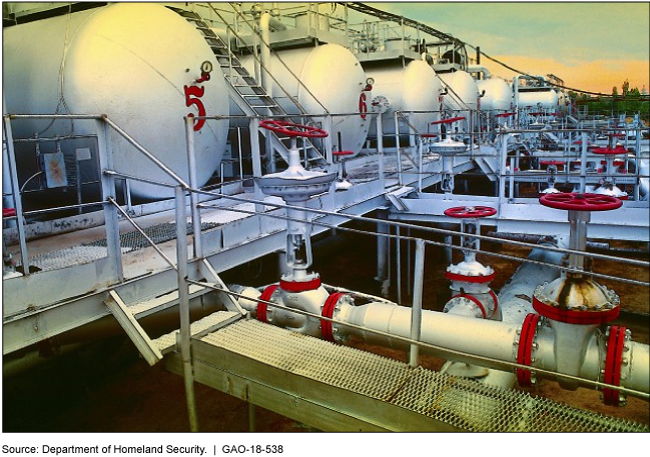 Since 2013, the Department of Homeland Security (DHS) has strengthened its processes for identifying high-risk chemical facilities and assigning them to tiers under its Chemical Facility Anti-Terrorism Standards (CFATS) program. Among other things, DHS implemented a quality assurance review process to verify the accuracy of facility self-reported information used to identify high-risk facilities. DHS also revised its risk assessment methodology—used to assess whether chemical facilities are high-risk and, if so, assign them to a risk-based tier—by incorporating changes to address prior GAO recommendations and most of the findings of a DHS-commissioned peer review. For example, the updated methodology incorporates revisions to the threat, vulnerability, and consequence scoring methods to better cover the full range of security issues regulated by CFATS. As of February 2018, a total of 29,195 facilities—including all 26,828 facilities previously assessed and 2,367 facilities new to the program—were assessed using DHS's revised methodology. DHS designated 3,500 of these facilities as high-risk and subject to further requirements.

DHS shares some CFATS information, but first responders and emergency planners may not have all of the information they need to minimize the risk of injury or death when responding to incidents at high-risk facilities. Facilities are currently required to report some chemical inventory information, but GAO found that over 200 CFATS chemicals may not be covered by these requirements. To improve access to information, DHS developed a secure interface called the Infrastructure Protection (IP) Gateway that provides access to CFATS facility-specific information that may be missing from required reporting. However, GAO found that the IP Gateway is not widely used at the local level. In addition, officials from 13 of the 15 Local Emergency Planning Committees—consisting of first responders and covering 373 CFATS high-risk facilities—told GAO they did not have access to CFATS data in the IP Gateway. By encouraging wider use of the IP Gateway, DHS would have greater assurance that first responders have information about high-risk facilities and the specific chemicals they possess.

Facilities that produce, use, or store hazardous chemicals could be targeted or used by terrorists to inflict mass casualties, damage, and fear. DHS established the CFATS program to assess the risk posed by these facilities and inspect them to ensure compliance with DHS standards. DHS places high-risk facilities in risk-based tiers and is to conduct inspections after it approves their security plans. Under the CFATS Act of 2014, authorization for the CFATS program expires in January 2019.

GAO assessed the extent to which DHS has (1) enhanced the process for identifying high-risk facilities and assigning them to tiers, (2) conducted facility inspections and measured facility security, and (3) ensured that information is shared with emergency responders to prepare them for incidents at high-risk facilities. GAO reviewed DHS reports and data on compliance inspections and interviewed DHS officials. GAO also obtained non-generalizable information from 11 trade associations representing chemical facilities regarding DHS outreach and from 15 emergency planning committees about their awareness of CFATS and the chemicals it covers.

GAO recommends that DHS take actions to (1) measure reduction in vulnerability of high-risk facilities and use that data to assess program performance; and (2) encourage access to and wider use of the IP Gateway among first responders and emergency planners. DHS concurred with both recommendations and outlined efforts underway or planned.