The Bureau of Engraving and Printing produces U.S. currency in Washington, D.C., and Fort Worth, Texas. It wants to build a new production facility in the D.C. area, which it estimates would cost $1.4 billion. This facility would include a secure perimeter and meet new security standards, something the current D.C. facility cannot do.

If the Bureau can't build a new facility, it plans to renovate the D.C. facility, which it estimates would cost $2 billion.

We found the Bureau's planning efforts generally followed leading practices and included some sound cost estimating practices. However, the overall cost to the government is unknown.

The Bureau of Engraving and Printing's Washington, D.C., and Fort Worth, Texas, facilities 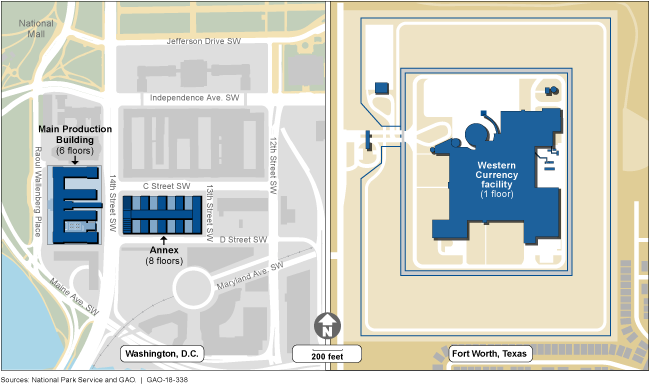 Maps show the 2 buildings of the downtown D.C. facility and the single building in Texas, which includes a secured perimeter.

The Bureau of Engraving and Printing's (BEP) studies and research determined that a new production facility would be less expensive and better address BEP's need for secure, efficient, and flexible currency production than a renovation of its Washington, D.C. facility. According to 2017 cost estimates, BEP's preferred option—a new production facility in the Washington, D.C., area and some renovated administrative space in its current D.C. facility—would cost approximately $1.4 billion, while a renovation of its current facility for both production and administrative functions would cost approximately $2.0 billion. A new facility similar to BEP's Texas facility could have a secure perimeter that meets federal building security standards. Such a perimeter is not possible with the current facility. A new facility could also house production on a single production floor to allow for a more efficient production process.

Aerial View of the Bureau of Engraving and Printing's Washington, D.C. and Texas Facilities

The ability to sell or repurpose any part of the current D.C. facility could affect the total federal costs of BEP's actions. According to officials from the Department of the Treasury (Treasury) and the General Services Administration (GSA), there could be savings if Treasury could consolidate staff or operations into the vacated facility. There could also be savings if the unneeded facility could be sold to a private buyer. However there would be costs to prepare the facility for use by other entities or if the unneeded facility does not sell. Agency officials said that it is too early to determine specific costs and savings.

BEP, within Treasury, designs and produces U.S. currency notes at BEP's facilities in Washington, D.C., and Fort Worth, Texas. The Federal Reserve pays for BEP's operational expenses, including currency production. BEP is requesting legal authority to purchase land and construct a new production facility in the D.C. area. BEP officials told GAO that, if it does not receive the necessary legal authority for a new production facility, it will renovate the D.C. facility.

GAO was asked to review BEP's facility planning process. This report: (1) describes the results of facility studies that BEP has funded and factors that led BEP to propose a new production facility, (2) examines the extent to which BEP's actions align with leading capital planning and cost estimating practices, and (3) describes other factors that could affect total federal costs of BEP's actions.

GAO provided the draft report to BEP, GSA, the Federal Reserve, and Treasury for review. BEP coordinated with Treasury in its comments. In the comments, reproduced in Appendix I, BEP emphasized the factors that led BEP to determine that a new facility is the preferred alternative. BEP and the Federal Reserve also provided technical comments, which we incorporated as appropriate. GSA did not provide comments.